Stephanie has a screen grab of another helpful Dawkins tweet, this time one that he deleted. Too far even for him?

It’s just great having our putative Leader of Atheism making sneery jokes about rape, isn’t it. It’s like having Fred Phelps as our spokesdude.

It’s also great having him decide what kind of feminism is the good kind and what is the other thing. He helps out that way in reply to a concerned fan warning him of feminist outrage.

With a certain kind of feminist, of course. Not with feminists who truly respect women instead of patronising them as victims.

So the right kind of feminist is one who does not think there is any kind of disadvantage that goes with being a woman, and so does not point out such disadvantages and try to get them eradicated. The right kind of feminist “respects” women by insisting that everything is already perfect for women. The way to “respect” women is to deny that there is such a thing as sexism or sexist behavior or sexist stereotypes.

PZ has a post urging Dawkins to get a clue about what feminism actually is and why it’s needed instead of just listening to the anti-feminist crowd.

Who are these mysterious patronizing feminists? They don’t actually exist. You are echoing a strategy of denial: you approve of feminists, but not the ones who actually point out sexist problems in our culture, or fight against discrimination, or point out that they’ve been raped, or abused, or cheated in the workplace, or any of the other realities of a sexist culture. This is what anti-feminists say: be quiet about the problems. If you mention the problems, you are perpetuating the sisterhood of oppression, you are playing the martyr, you are being a pathetic victim who must be treated with contempt.

But if no woman speaks out about the problems, how will we ever know to correct them? If we shame every victim for being a victim and daring to reveal her victimhood, it becomes very easy to pretend that there is no oppression. 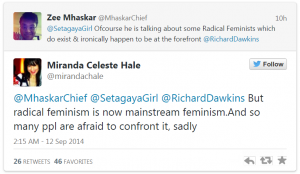 And “radical” in this context means what, exactly?

There is no such thing as a “radical feminist” anymore.

Don’t get me wrong! There was. In the 60s and 70s, there were radical feminists who were distinguishing themselves from liberal feminists. Radical feminists agreed with liberal feminists that we should change the laws to recognize women’s equality, but they also believed that we needed to change the culture. It was not enough to pass the ERA or legalize abortion, they believed, but we should also talk about cultural issues, such as misogyny, objectification, rape, and domestic violence.

In other words, what was once “radical” feminism is now mainstream feminism.

Read that second paragraph carefully. Is there anything you disagree with in that? If not, then welcome, you’re a radical feminist, too. And could you please stop supporting reactionary anti-feminists? Thanks.

Are all reports of sexual predation false? » « Annals of dismissive contempt