I find myself having to disagree with something Richard Dawkins said on Twitter, again. 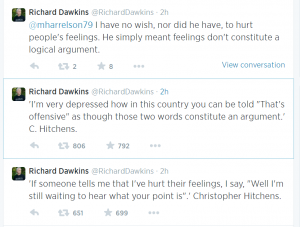 In reverse order, so in chronological order:

Richard Dawkins @RichardDawkins · 6h
‘If someone tells me that I’ve hurt their feelings, I say, “Well I’m still waiting to hear what your point is”.’ Christopher Hitchens.

‘I’m very depressed how in this country you can be told “That’s offensive” as though those two words constitute an argument.’ C. Hitchens.

@mharrelson79 I have no wish, nor did he have, to hurt people’s feelings. He simply meant feelings don’t constitute a logical argument.

The last tweet, which was in reply to the question “do you, personally, respond with such a disregard of someone’s feelings? Or are you making an intellectual point?”, shows what’s wrong with those tweets. They don’t work as stand-alone tweets with no context; in that form they just look like saying “be shitty to everyone.” That’s not good advice.

And it doesn’t come across any better when Hitchens says it. A kind Facebook friend found the source for me; it’s this video, starting at 6:20 with an audience question asking how do you separate attacking ideas and attacking people. Hitchens’s response comes across as brutal, frankly.

I hope that wasn’t true of him in real life. I hope if his daughter told him that, for example, he didn’t reply with “Well I’m still waiting to hear what your point is.”

Now it’s possible that he meant “If someone tells me that I’ve hurt their feelings when I’ve been talking about a large institution or custom that is not personal to them” – then it at least makes sense. But that isn’t what he said, and it’s not what the tweet said.

I think we have every right to say harsh things about religion, clerics, sects. But I do not think we should be defending unapologetic verbal brutality across the board.

Never said it » « The impossible dream