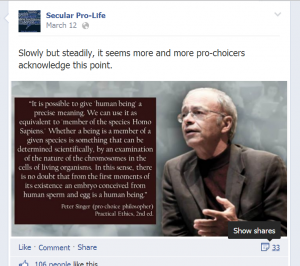 “Slowly but steadily, it seems more and more pro-choicers acknowledge this point.

It is possible to give ‘human being’ a precise meaning. We can use it as equivalent to ‘member of the species Homo sapiens’. Whether a being is a member of a given species is something that can be determined scientifically, by an examination of the nature of the chromosomes in the cells of living organisms. In this sense there is no doubt that from the first moments of its existence an embryo conceived from human sperm and eggs is a human being.”

Of course we acknowledge it. A human embryo is of the human species. The issue is not that it’s not human and the issue is not that it’s not alive. The embryo is alive and of the human species. It’s a human being in the sense that Singer specifies there. That’s not the only sense. The sentence doesn’t even end there in the book: the punctuation mark after “being” is a semi-colon, and the sentence goes on to say that the same applies to an anencephalic infant. Then there’s a new paragraph and a new and different meaning of “human being” – so Singer isn’t saying or acknowledging what the hacks at Secular Anti-abortion Rights are pretending he said and acknowledged. Surprise! They’re not honest.