Priyamvada Gopal is still throwing verbal bricks at liberals. I understand liberals here to mean people who defend universal human rights as opposed to people who carve out exceptions for “cultures” or “communities” or religions or, usually, all three. She threw her latest bricks while offering Laurie Penny support in her battle with “white” yaddayadda on Twitter. 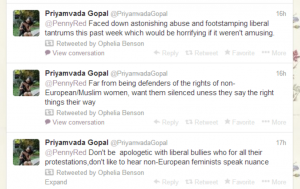 @PennyRed Don’t be apologetic with liberal bullies who for all their protestations,don’t like to hear non-European feminists speak nuance

Far from being defenders of the rights of non-European/Muslim women, want them silenced uness they say the right things their way

Faced down astonishing abuse and footstamping liberal tantrums this past week which would be horrifying if it weren’t amusing.

I think she wants us to equate liberals with “Western” and “white”…which means she wants to hand over liberalism to the “white West”…thus making the non-West illiberal.

I wonder if she’s really thought this through.

Mutts and purebreds » « You have to judge