Bill Cooke is the Director of Transnational Programs at the Center for Inquiry.

On the fertile high country in central Kenya, in the shadow of the Nandi Hills, is the Ogwodo Primary School. Five or so buildings, two of them built by the parents out of mud and cow dung. All quite large and bare, with forty or more children to each room, sitting on hard pews and working at long benchtops. Here is where a sizable group of orphans are getting their schooling thanks to the Center for Inquiry, the humanist think-tank based in Amherst, New York.

There are many orphans in Kenya, most the result of their parents having died from HIV/AIDs, being too poor to afford medication, or learning of their disease too late. The churches bear a huge responsibility for the unnecessarily high death toll. Their primitive attitudes toward contraception and their encouragement of superstitions and misinformation about what HIV/AIDs is and how it is caught is a scandal to all civilized people. In the face of this ongoing catastrophe, George Ongere of CFI–Kenya has set up the Humanist Orphans program. 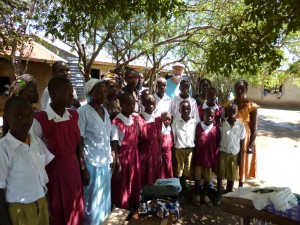 School fees keep many of the poorest children away from school in Kenya, as does the cost of uniforms. Most schools in Kenya insist on a uniform. It’s a way of weeding out those parents who are not serious about their children’s education. But, with no parents to look out for their interests, most orphans miss out on school altogether, and have no future to look forward to.

So George Ongere has gathered together this group of orphans in his home district, overseen their placement in the homes of relatives or neighbors, and ensured their school fees and uniforms are paid for from his already-overstretched CFI stipend. It was deeply moving to see these young people being given a chance at life. The needs of the orphans are still legion. But some sort of start has been made.

Addendum updated November 19: If you want to donate to support this work, donate to CFI and earmark it for the International Program by emailing the Development Department.