There were sculptures of horses on a roundabout (a traffic circle) in Abu Arish in Saudi Arabia. That sounds pretty and decorative and pleasant. But then along came a Grand Mufti to say it was sinful.

Grand Mufti Abdulaziz al-Shaikh sent a letter to the governor of Jazan demanding that “the sculptures be removed because they are a great sin and are prohibited under sharia (Islamic law),” said another news webitse, sabq.org.

Statues of people and animals are prohibited under Islam as they represent a form of idolatry. However, the religion does allow artworks depicting plants and landscapes.

That’s nice of it. It’s so kind and generous of it to allow some things. But if you want more than plants and landscapes – well that’s too god damn bad.

The sculptures were smashed by the municipality. 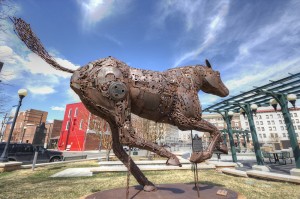 Update: the photo isn’t of the sculptures in question, I should add. This one is in a town in Montana, and it is (I assume) intact and there for everyone’s innocent enjoyment. I just wanted a creative commons picture of a sculpture, so I browsed. There’s a lot of kitsch but also a lot of nice stuff like this one.