Update May 21 see update below. 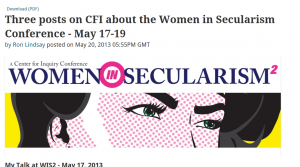 That’s on the Richard Dawkins Foundation for Reason and Science website.

But we’re the bullies. Never forget that. We use our immense ruthless power as bloggers to argue with other bloggers, while poor tiny powerless meek obscure humble shoemaker Richard Dawkins simply tries to stamp Rebecca Watson into the ground a little bit more by re-posting Ron Lindsay comparing her to North Korea.

We’re the bullies. How does that work again?

And no those are not “three posts about the Women in Secularism Conference” – that’s false advertising. They’re three posts about Ron Lindsay’s dislike of feminism and then his fury at uppity women who dislike his thrusting of his dislike of feminism on a conference that wasn’t meant to be about his dislike of feminism. Those posts aren’t about the conference at all. You won’t find out by reading them that Maryam Namazie was a speaker and on a panel about leaving religion. You won’t read anything about Rebecca Goldstein’s talk or Katha Pollitt’s or Susan Jacoby’s. You won’t see anything about Debbie Goddard or Jamila Bey or Amanda Marcotte. The posts are not about the conference! They’re about spite and anger.

There’s nothing about the conference on the website. Do a search and the above item is the only one you’ll find.

Brilliant. I guess Ron was so pleased with the results of his three blog posts at the conference itself that he felt it would be even better to trash the conference afterwards with the help of Dawkins. What’s he going to do for an encore? Post photoshops of all the speakers? Is it heads on goats time?

Update May 21 No, that last para is not right, because Ron didn’t ask RDF to publish those posts.

Also, I of course know perfectly well that he wouldn’t actually post photoshops of all the speakers. On the other hand – if you had asked me, I would have said he would never attribute “the most intellectually dishonest piece of writing since the last communique issued by North Korea” to one of the speakers, either. I would never have guessed beforehand that he would write a thing like that about a speaker at a CFI conference. So, yes, in a sense I know he wouldn’t post photoshops of us, but in another sense, I don’t really know that I do know that. Yet I feel as if I do know it, hence phrasing it as “I know perfectly well that” he wouldn’t.

At any rate, I freely admit that was hyperbole. But then so was North Korea, and I’m not the CEO of anything.

Just grab it » « Quote of the morning