Update: A helpful informant got curious and did a little digging on Vacula’s timeline and came up with…quite a lot of Vacual prodding me to go on his podcast, just since March 3 – less than two months. To wit:

I saw some of those, and ones before March 3, and that is why that “Maybe she will chat at #wiscfi?” made me think he really did have a plan to get up in my face at WiS2 and try to force me to “chat” with him. I do not want that, so I attempted to pre-empt him by telling him not to.

It’s been quiet for the last two weeks or so, I think, but now PZ and Ophelia are fanning the flames once again. Along with their commenters, a threat narrative and an attempt to ban me from Women in Secularism 2/kick me out of the conference is being mounted. I’m not going to stand by and ignore what’s going on.

That’s staggeringly dishonest. This, again, is what started the “flames.” 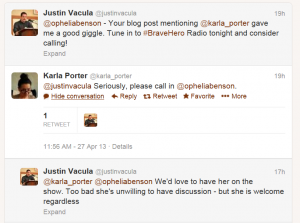 @opheliabenson – Your blog post mentioning @karla_porter gave me a good giggle. Tune in to #BraveHero Radio tonight and consider calling!

@karla_porter@opheliabenson We’d love to have her on the show. Too bad she’s unwilling to have discussion – but she is welcome regardless

@caias@OpheliaBenson@karla_porter Too bad Ophelia won’t come on #BraveHero but we appreciate early promo. Maybe she will chat at #wiscfi ?

I saw all of that only because some guy I don’t know included me in a reply to that tweet.

I am not the one who “fanned the flames” again.

Mo has been getting pointers » « We’ve learned critical thinking too well?