Why? While walking to lab today, I got my first cat call of the year. Woo. I don’t know if there’s something about warm weather that gets guys all worked up, or if it’s the fact that I’m no longer wearing jackets and sweaters that hide my boobage*, but this always happens in the summer. Seriously, can someone with more testosterone than me explain this phenomenon to me? I really don’t get why guys think it’s so awesome to hang halfway out of their car whistling and yelling nonsensical flirtations to some random girl. I never know if I should be flattered, or if they’re just doing it sarcastically to mock me…

Me: I don’t get catcalling, like while you’re driving away quickly. What’s the point?
Male Friend: I think it’s more about the guys in the group… guys don’t do it alone
Me: Yeah, it was the passenger in a car. I just don’t get it
Male Friend: Oh, so he was a Scrub. You don’t want none of that.
Me: lol scrubs don’t get no love from me, don’t worry

*I’ve been told that I have “surprise boobs.” Most of my shirts come up to my neck so no gratuitous cleavage, and from about September to April I’m wearing sweaters that apparently flatten me out. I’ve caused more than one guy to go wide eye with shock the first time they see me shirtless. This is why I don’t get girls that flaunt cleavage all the time – it’s so much more fun to take them by surprise! That being said, my threadless shirts are pretty tight in the chest, so I guess that shows them off a bit. You know what, I can’t help that they make those shirts for skinny A cup girls… Wow, I’ve been a bit obsessed with boobs lately, haven’t I? I can’t stop talking about them! Boobs! Boobies! Breasticles! Ahhhhhh!!!

Today my friend/new roommate (The froomate? Can I refer to him as that from now on?) and I went on a quick Walmart run. He needed ingredients for his stir fry, I needed sports bras and new panties. Random combination between the two of us, I know, but what is Walmart for other than random cheap shit. Anyway, as I have two bras clutched in hand and I’m deep in thought over which panties to pick out, who randomly walks by other than our older, male Associate Dean of Students who is the head of the office for student organizations at Purdue, and personally knows me through my work as President of the Non-Theists. He waves happily and I kind of give a mortified little wave back.

And you know, this is why I hate shopping for underwear. I always have this fear that someone I know who I do not want to know what my panties look like is randomly going to run into me. Maybe I’m just being overly sensitive. But you know what, it’s just a tad bit annoying that all the previous times I’ve run into him in innocuous situations he didn’t know me well enough to recognize me, but now that he knows who I am, he finds me looking at panties. Curses!

Both Pharyngula and Friendly Atheist have already commented on this lovely new study: Professor Robert Putnam from Harvard has found that the number of young people who have no religious affiliation has skyrocketed to 30% – 40%. Now, these aren’t all necessarily atheists, but one can hope this is the first step for many of them to go down the slippery slope of Heathendom.

When I was about ten years old I confidently told my father that by the time I was 40, no one would go to church anymore. He looked at me shocked (especially since I didn’t know what church was actually for, or who Jesus/God were at the time).

“Why do you think that?” he asked. I told him everyone my age always complains about how much they hate going, so why would they keep doing it when they grow up? He chuckled at me, thinking this was a ridiculous idea, even though he himself was not religious. “We’ll see,” he said sarcastically.

Maybe in 19 years people will still be going to church, but I still consider this trend a victory. Take that, dad!

I also consider this a success for the atheist dating market, though I don’t have to worry about that too much as an atheist chick. Though the odds are good, the goods are odd… or to quote Triumph the Insult Comic Dog, “The male to female ratio, yeah? I mean you have your veritable pick of the litter. You can choose from all kinds of guys who have no idea how to please you.” (Just kidding, male readers! I <3 all of you, and I'm sure us uninhibited atheists win when it comes to being kinky in the sack)

The results of the Society of Non-Theists’ officer elections tonight can be summed up by my friend:

“We now have three attractive women as our officers. By the way, the contracts you all signed include mandatory matching leather outfits. What, you didn’t know about those? Club attendance will skyrocket!”

But it’s sort of true. We’re like an atheist chick super heroine squad. We even have one brunette, one red-head, and one blond. Move aside, Powerpuff Girls!

EDIT: Apparently our hair combinations are a TV trope. Woohoo!

I found an unsettling similarity between two of my recent posts… So in honor of the fabulous blog Indexed: 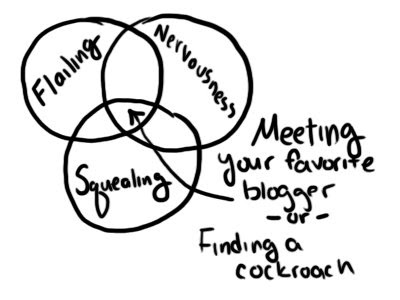 Anyone who knows me will tell you that I am not a stereotypical girly girl. However, I do relapse in three main ways:

2. America’s Next Top Model is my guilty pleasure TV show. I have no idea why. Tyra Banks’s insanity is always amusing, and it’s just so addictive watching girls be catty to each other when you’re not involved. I think I’m satisfying some sort of primal female urges that I otherwise ignore. Oh, and artsy pictures are a plus.

3. I hate bugs, insects, spiders, and any other kind of creepy-crawlies.

Yes, I know that I’m a biologist…but I am not a hippie/pot smoking/one with nature and all of God’s creatures biologist. Hiking and bird watching and camping are all just sort of “meh, okay” to me. I get excited over stuff like genes and evolutionary theory (I’m super cool). I’d honestly enjoy nature much more if I had a magical force field that kept bugs a meter away from me.

That being said, I found a cockroach in my apartment this morning. Not. Cool. I’m sort of glad no one was around to witness me doing the “freeze in spot and flail arms uselessly” pose, which I totally did. The nasty thing was just lying on its back in the middle of the bathroom floor not moving. I wondered why the hell it would randomly drop dead and roll over in the middle of the floor, so I got a cup to try to scoop it up…and it came back alive.

Wtf, seriously? Was it trying to trick me? Why the hell was it playing dead? I ended up just putting the cup over it and leaving it for my roommate to dispose of…who wasn’t too happy about it. Blech. I really hope this is an isolated case, but you know what they say…when there’s one, there’s more. The apartment I lived in last summer was infested with them, and it was horrible. Every night I had Kafka-esque nightmares of giant cockroaches trapping me in my bedroom.

The worst part is I know my fear is illogical. If cockroaches were rainbow colored or shiny neon green, I would probably be poking them with sticks or playing with them. Buprestids are awesome looking. But no, they had to be twitchy and poo-colored, and who wants that as a roommate?

Hemant Mehta gave a talk for us today at Purdue… I finally got to meet my favorite blogger/quasi-famous internet celebrity! Yay! …I will repress the rest of my fangirl squealing, because I kind of think he reads this. Knowing he has cute atheist girls squeeing over him may go to his head ;)