Guest Post by Sharon Moss, President of the Humanist Community of Central Ohio with Lyz Liddell, Director of Campus Organizing at the Secular Student Alliance

These are the views of individuals and do not represent the views of the Secular Student Alliance or the Humanist Community of Central Ohio.

If the freethought community doesn’t have a problem with sexism, why did I just spend 20 minutes in the bathroom consoling a woman who was publicly insulted when she asked the panel a question about sexism in freethought communities? Note to dudes, it doesn’t matter if it is sexism or biology, if you’re making people who come to your group uncomfortable, you’re doing it wrong. — Facebook status, Sharon Moss, 1/30/11

Last weekend Lyz and I were at American Atheists’ Southeast Regional Atheist Meet in Huntsville, Alabama. This is the first regional conference America Atheists organized and the over the two prior days, it sold out with 200 atheists from as far away as North Carolina and Ohio. At a rough visual estimate, probably 30% of the attendees were women. When David Silverman polled the audience on Sunday afternoon, for about half of those in attendance, this was their first atheist conference of any kind. Clearly, American Atheists is on to something. 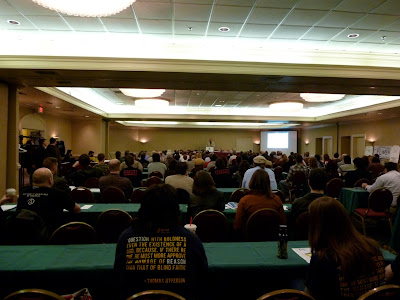 Sunday morning’s first session was an “Attendees’ Choice” panel discussion, featuring five local group leaders. Attendees were asked to submit written questions ahead of time, and the most frequently asked questions were asked of this panel.

A panel of five guys and one woman discussed what an atheist group should do to attract more women. The all-too-common problem came up of a woman showing up to a meeting and every dude there hitting on her. First, the panelists grabbed a theme that had been floating around all weekend: that men hitting on women is just biological (therefore excusable), making it sound like a woman in that kind of situation should just STFU and get over it.

Then the moderator asked the women in the audience, as if it were a rewording of the same question, whether they would feel harassed or flattered if they showed up to an event and a few guys started flirting with them. We women in the audience, pressured to respond to the question at hand but feeling duped because we knew it wasn’t the same thing, gave an honest response. Sure, a few guys flirting with us is sexy. BUT!!! (we all screamed in our heads, even though the panel never let us say it out loud) 20 guys our father’s age blatantly staring at and talking to our cleavage is a totally different situation! It’s not sexy, it’s gross and creepy.

It was extremely frustrating. So I wasn’t surprised when the young woman who finally stood up and started challenging the panel snapped. First, despite her having her hand raised for most of the discussion, the panel never even acknowledged her or invited her opinion (despite soliciting the opinion of several guys both on and off the panel. Finally, she just stood up and started shouting to make her voice heard. Her question focused on the language the panel had been using – “female” instead of “woman,” and pointed out that it made us sound like livestock rather than people.

But did the panel address the question, perhaps looking for the point at which the discussion took on the word “female” so universally? Did they take the opportunity to discuss how things like language can make a group uncomfortable for women, and what we could do to make it better? No! The woman asking the question was viciously torn apart and ridiculed for even bringing it up. First, a combination of panelists and audience members tried to defend themselves by saying that feminists won’t let men use the word “women” off-limits because it has “men” in it. Then a commotion of everyone talking at once, which was cut off by one panelist’s definitive comment: “What do you want us to say, ‘the weaker sex?”

She got upset (and who wouldn’t be?) and left the room. I – a member of the audience, not one of the event organizers – went after her. While there were a few odd calls from the audience for the panelist to apologize, the moderator sort of awkwardly pushed the discussion on to a new topic, with an embarrassed air of “Sorry for the disturbance.” No apology, no discussing a better way it could have been handled. Not even a joking “This is how *not* to be welcoming” comment. Just “nothing to see here, move along.”

This wasn’t an isolated incident. In fact, almost the entire conference had a bizarre quality to it when it came to gender issues. If I had to point to when it started, I think it would have to have been in Sean Faircloth’s Saturday talk. This talk began well enough: a strong feminist position, an excoriation of Victorian moralist Anthony Comstock, mention of several areas in which the law imposes on women’s rights. But then it got weirdly uncomfortable. First, came the proposal of a new motto: “What Would Don Draper Do?” (Don Draper is your role model, seriously?)

[Jen’s note: I’ve temporarily removed the section on the “Million Dollar Challenge” since there seems to be a lot of debate over whether it was depicted fairly. The Alabama Atheists are uploading the video of Sean’s talk to make this situation clear. While I wouldn’t let Sharon and Lyz do a guest post unless I trusted their judgement, I also don’t want to misrepresent Sean Faircloth, so I’m waiting until I’ve seen the video.]

From there, the conversation wandered into a weird discussion about how men’s biology drives them to frequently (if not constantly) pursue sex, and since it’s biology, no one should get upset at, judge, or think less of men for any skirt-chasing they might engage in. (Because we never intellectually overcome our animal instincts in other areas of our biology, right?) The attitude in the room shifted: suddenly women were the bad guys for saying no to men’s propositions because it denies the men’s innate biology. Most of the guys in the room loved it, but as a woman in the audience – it was really uncomfortable. It was demeaning, frustrating, and not what you want to say to attract more women into this movement. And the attitude stuck around.

All these people got presented with a totally skewed perspective on our movement’s views on gender equality and sexuality. The message was loud and clear: it’s totally ok for guys to be assholes. Women should just STFU when men treat them like sex objects. The appropriate way to solve the problem of gender imbalance is to ask a bunch of guys about it (oh, and the entire problem is just because women won’t let men have sex with them whenever they want to). The way to handle women’s input is to ridicule them.

But there’s an even bigger problem here. Situations like this drive wedges between otherwise natural allies in our movement. That young woman is on our side – she came to this event at the cost of her time and money to get involved – and she was driven away. So are thousands of women across the country – for no other reason than because this movement can’t seem to figure out how to treat them like equal humans.

We need to have these conversations, but there’s no reason to drive away people who are *on our side* by having them in completely the wrong way.

American Atheists created a real opportunity for members of local groups to come together, share ideas, get leadership training, and go home ready to take over the world. For many issues– activism, law, supporting campus groups, the future of the atheist movement– they were incredibly successful. I’ve been doing this for 10 years and I haven’t seen this kind of enthusiasm for the grassroots outside the college level. Ever. But there is always room for improvement. We lost a real opportunity for local leaders to share their experiences, successes and failures. Creating a more inclusive movement needs to be a priority at both the national and local levels.

From my own experience as the former president of Students for Freethought at Ohio State and as the current president of the Humanist Community of Central Ohio and from talking to other local leaders, the grassroots gets it. We want to be more inclusive and we’re taking the steps to get there.

Here’s what I’ve learned, both from my own experience and from talking to other local leaders. These suggestions aren’t just about being more accessible to anyone who isn’t a middle aged white man. Some of these are just good practices for running a group. Turns out running a more professional (wrong word) group brings in more people of all kinds.

Our movement is growing faster than ever, and we have more opportunities for growth and expansion than we have ever seen before. While hiccups like this can be frustrating, they’re also a great chance for us to make our groups, communities and movements even stronger. We encourage you to take a look at your group and see if there are ways you can reach out to women, younger adults, minorities, or other groups.