Womanist Musings has a great summary of why the new development in the Miss California controversy sucks. If you desperately try to avoid tabloid style news, let me fill you in on what has happened. Miss California says she’s against gay marriage during the Miss USA pageant to Perez Hilton, of all people. She loses, scandal ensues saying she lost because of her views, yadda yadda. Miss C claims she’s just a good Christian girls with strong morals and all that jazz. Photos are released of a topless Miss C that she took when she was trying to become a Victoria’s secret model. Both sides freak out. Conservative pageant people are pissed because you’re not allowed to have any nude or semi-nude photographs. Liberal people are gleefully chuckling at her hypocrisy and are glad she’ll probably lose her title.

There is so much Wrong floating around that I don’t even know where to start. Pageants are such patriarchal stereotypical sexist bullshit to begin with that ranting about them is a waste of time, but one thing really 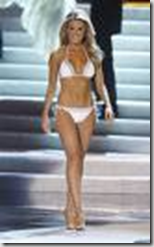 bugs me. Let’s compare the two photos, shall we?

“Ms. President, another topless photo has surfaced. The elderly members of the press want a statement.”
“Oooh, I remember that one! That was some good tequila. Man, look how nice my boobs looked.”
“Uh, they’re great, Ms. President.”

But you know what, okay. She signed a contract saying she didn’t have any nude or semi-nude problems, and the pageant people get to make their own dumb rules. So fine, punish away. But to all the liberal people who think these rules are stupid and don’t have a problem with boobies, but are just glad to get revenge on a conservative girl…shame on you. She’s not the freaking Westboro Baptist Church. She said she doesn’t support gay marriage, not “all fags should die in a fire” or something. People say she’s a hypocrite because she’s claiming to have conservative values yet has posed topless…but seriously, so what? Why are liberals forcing anti-toplessness to be a conservative value? If we want people to stop freaking out about women’s boobs, we need to stop treating it like it matters. Why can’t we all be accepting of teh boobies?

Maybe I’m just a softie, but I don’t wish bad things upon people even if I fervently disagree with their political viewpoints. I also think boob scandals are about the most stupid thing ever (the Janet Jackson incident made my head nearly explode), so I just wish we’d stop making such a big deal out of them. Pro-boobs people unite!