Effective Altruism (EA) is a community focused on donating money to create the greatest good in the world. This is mostly (?) unobjectionable–but there’s problems. The EA community has a number of philosophical viewpoints that most external observers would consider absurd, and which materially affect their donating behavior.

In particular, many people in EA believe that the most efficient way to create the greatest good is by preventing extinction caused by AI. EA surveys suggest that about 18% of community members donate to “Long term & AI” causes, compared to 62% that donate for global health & development. Clearly concern about AI is not a unanimous viewpoint in EA, but you have to imagine the kind of community where everyone takes it seriously.

EA has been under the spotlight in current news because Sam Bankman-Fried–recently arrested for massive fraud at his cryptocurrency exchange FTX–was a vocal proponent of EA. More than a vocal proponent, he founded the FTX Future Fund, which committed $160M in charitable grants to various EA causes. At the top of Future Fund’s cause list? AI.

Although I’m critical of EA, I actually think it’s a bit unfair to pretend that they’re directly responsible for SBF’s fraudulent behavior. Instead I wanted to focus on some of SBF’s philosophical views, which are shared by at least some parts of the EA community. Specifically, let’s talk about the idea that charitable causes are risk-neutral.

END_OF_DOCUMENT_TOKEN_TO_BE_REPLACED

For the past two years, I’ve been writing short diary entries on games I’ve played or interacted with. These diary entries appear on my Pillowfort, where they’re honestly not very popular among readers.  But they’re popular among one very important reader–myself.

I will share my personal highlights from the diary–which is not to say my favorite games, but my favorite diary entries. Keep in mind that the purpose of these diary entries is not necessarily to review the games–and some of these games are so obscure that why would you particularly care if they’re good or bad? The best diary entries are ones that say something interesting even if you have no interest in the game–or else they’re just funny.

END_OF_DOCUMENT_TOKEN_TO_BE_REPLACED

If Professional Investors Missed this | Jeff Kaufman – Background: Last month, the cryptocurrency exchange FTX collapsed, because its founder Sam Bankman-Fried had apparently been dipping into customer funds.  Bankman-Fried had a lot of ties to the EA movement so I was curious what EA folks were saying about it.  EA is not happy about it, and in fact they are directly impacted, with many promised charity grants now gone.  There’s a question of whether EA ought to have seen the red flags, and the answer is maybe yes, maybe no.

From an external perspective, it looks like EA is being pretty naive about allowing billionaires to use their movement to launder their own reputations.  And Bankman-Fried should have been suspicious from the start, as a cryptogrifter who places a lot of focus on AI risk.  Perhaps it was impossible to foresee quite how far Bankman-Fried’s nefariousness extended, but it feels like this was a “reap what you sow” situation.

Penises, Privilege, and Feminist & LGBTQ+ Purity Politics | Julia Serano – Serano outlines a theory of how sex is seen as a contamination event, and describes its impact on bisexual and trans people.  I also appreciated the explanation of “cultural feminism”.

END_OF_DOCUMENT_TOKEN_TO_BE_REPLACED 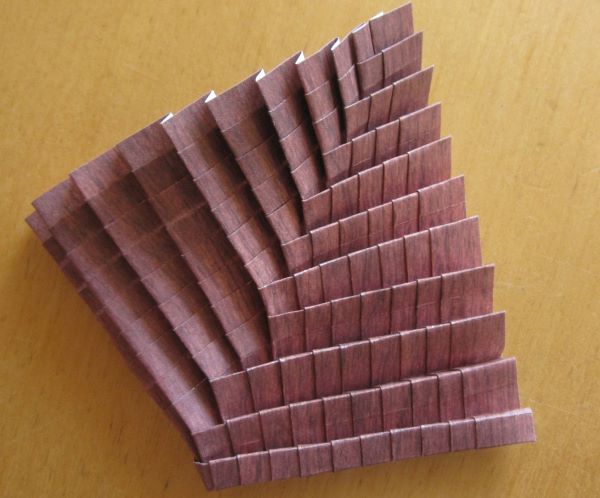 Pleated leaf, designed by me, but likely a common design

At some point, I discovered the area of pleat tessellations, a technique popularized by origamist Goran Konjevod.  There are a bunch of things you can do with this technique, but I thought I’d show the simplest example I have.  This is something that you can fold at home, and experiment with your own variations.

To make this model, we start by folding the paper into 16 divisions both horizontally and vertically.  This is a common first step in many origami tessellations, so forgive me for just throwing it out there like it’s nothing.  For once, I’ll go into more depth about how to do that.

END_OF_DOCUMENT_TOKEN_TO_BE_REPLACED

Twitter laid off 50% of its employees and 80% of its contractors, and then at least 16% more of its employees quit. At this point, I am massively rooting for Twitter to fail–purely for selfish reasons, as a tech worker who wouldn’t like to see CEOs rewarded for mistreating tech workers.

Last Friday, #RIPTwitter was trending on Twitter, and people seemed to think Twitter would stop working at any moment. I think the more likely timescale is not days, but months–but that’s just what I hear from people who work in that area. The website may not disappear immediately, but we’ll see a deterioration of services, eventually losing something that proves essential. I’m so interested to see what will deliver the killing blow.

Although Twitter seems to be working for now, we can actually see various services breaking in real time by tracking complaints on the r/Twitter subreddit. I did not confirm these issues, and some might only affect a certain subset of users, or may arise from pre-existing issues. But I think there’s a good chance that Twitter 2.0 is to blame. Here’s a top ten list so far.

END_OF_DOCUMENT_TOKEN_TO_BE_REPLACED

A game that sticks in my mind is “You Are Jeff Bezos“, a free text-based adventure where you wake up as Jeff Bezos and try to spend all your (Jeff Bezos’) money. One option is “Buy Twitter and delete his account”, for 50 billion dollars. This game is from 2018, so it’s referring to the traitor in chief, scourge of democracy. A wish fulfillment fantasy.

Back here in the real world, Trump got banned in 2020, and it seemed like Elon Musk was doing the reverse, buying Twitter specifically to unban his account. That’s what I thought would happen, and perhaps it still will. What I did not expect, is whatever mess is going on now–an exodus of users, employees, and advertisers.

The surprise is worth noting. It would be easy for an Elon-hater to claim that they knew this would happen all along, but did they really? It’s okay to admit that Elon Musk surpassed expectations.

END_OF_DOCUMENT_TOKEN_TO_BE_REPLACED

But in the public conversation, the metaphor of the participation trophy has overtaken their physical reality.

Yeah, I got a few of the participation trophies, back when I played soccer in grade school. I was awful at soccer. In retrospect, our whole team was bad, being composed of a bunch of kids who may or may not have been forced into it by their parents. But at the time I felt like I was particularly bad, like I dragged the whole team down, and I didn’t understand why I was there at all. I got a trophy for doing that, every year.
END_OF_DOCUMENT_TOKEN_TO_BE_REPLACED