I’ve been busy the past month!  The Ace Community Survey released its annual survey, and a 140 page report on an earlier survey.  I also wrote a long blog post about the intersection of asexuality and being a nerd, in which I complain about a certain fictional asexual physicist on a show I have never watched.

Google’s Caste-Bias Problem | The New Yorker – An interview with a former Google employee, who tried to organize a DEI event about caste discrimination.  Google got complaints from other employees about the event, and it got “postponed”, which seems to really mean it was cancelled.  Instead, the organizer of the event was given a warning, and then she resigned.  Apparently it’s a common stance among conservative (?) Hindus that caste discrimination just doesn’t exist and that to even speak of caste discrimination is anti-Hindu discrimination.  As a social justice activist, I learn to be humble about axes of marginalization that I am unfamiliar with–but I’m confidently unsympathetic with that point of view.  For members of a majority group to deny that the minority group experiences discrimination, that’s an all too common pattern, and presumably cross-cultural.

Why Queer TV is Getting Worse | verilybitchie (video, 45 min) – Verity Ritchie talks about “gaystreaming”, content that is gay but otherwise does everything it can to appeal to mainstream tastes.  There’s discussion of Heartstopper, contrasted with the work of Desiree Akhivan, topped with a discussion of the economics of streaming services like Netflix.  I love it.

As I pointed out in my review of Heartstopper, its gentle low-stakes story is common in the queer webcomic genre it comes from–but I don’t think that’s what makes it particularly amenable to being mainstreamed.  What makes it mainstreamable is that its author is clearly passionate about educating people about queer issues: modeling good behavior, denying stereotypes, and explaining relevant issues.  This is valuable to straight people who clearly need that education, and also for queer people, for whom learning about being queer is an important part of personal development.  But it also confines the webcomic to issues that are simple enough to be widely teachable, and the story may not reflect the messy realities of queer lives.  Following ace admiral I call this “checklist representation“, which is primarily concerned with checking off all the things required for a “good” representation.

END_OF_DOCUMENT_TOKEN_TO_BE_REPLACED 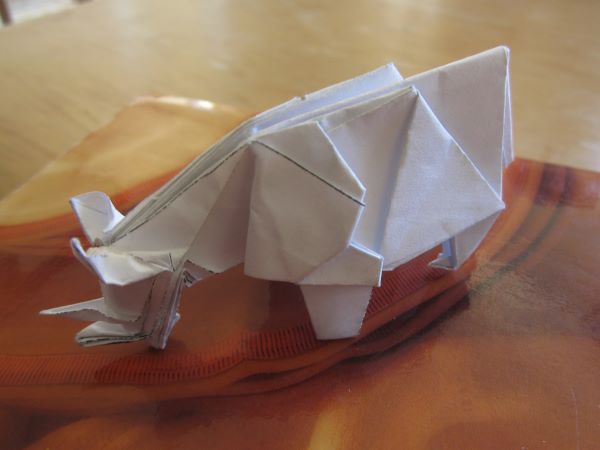 When I folded this model back in 2016, I was challenging myself to fold it without explicit instructions.

Traditionally, people fold origami by following folding diagrams, which list out the steps in sequential order.  However, at more advanced levels, you can fold origami with nothing but a crease pattern, also called a CP.  A CP shows where all the essential creases will lie, if the paper were fully unfolded.  CPs provide information in a much more condensed format, and are far easier to create than folding diagrams, so it tends to be a lot easier to find CPs than full folding diagrams.

Below the fold I have a few tips for origamists interested in folding from CPs.

END_OF_DOCUMENT_TOKEN_TO_BE_REPLACED

I recently finished The Urth of the New Sun by Gene Wolfe, a coda to his most famous series, The Book of the New Sun (which I wrote about in two halves). This post will contain lots of spoilers, although I’m going to continue beating my drum about how it’s okay to see spoilers for this particular series.

To review: The Book of the New Sun took place in a far-flung post-apocalyptic future, where technology is advanced, but the general populace lacks access and education, so that it plays out like a medieval fantasy. The story followed Severian, former apprentice of the guild of torturers, who is destined for the throne of the Autarch. It is a coming of age story in which Severian comes to reckon with an upbringing that trained him to do something that he could not morally accept.

The Urth of the New Sun follows the events of The Book of the New Sun, but it is thematically completely distinct. It is no longer a coming of age story at all. Instead, it reads like Christian meta fiction.

END_OF_DOCUMENT_TOKEN_TO_BE_REPLACED

FYI, I was interviewed about romantic attraction and other things, for Honi Soit, a newspaper for the University of Sydney.  I like the article a lot, although I hope it’s not too dense, haha.

Summer of Math Exposition 2 | 3Blue1Brown (video and article series) – SoME2 is a contest to produce math explanation articles and videos.  I am all over this–although I’m also judgmental so I will say that the quality can be mixed.  The winners are a good place to start.

I’ve written quite a number of math explanations in the past myself, and this makes me want to write more.  Gosh it sure takes a lot of work though.  Maybe I could revamp my really old explanations, like the one about the Banach-Tarski paradox, or the ant & rubber band problem (the rubber band is the universe).

END_OF_DOCUMENT_TOKEN_TO_BE_REPLACED

So let’s read the article carefully and determine which analysis was used.
END_OF_DOCUMENT_TOKEN_TO_BE_REPLACED

Dark Souls and other games made by FromSoft are legendary for their fans’ elitism. The phrase, “git gud”, archetypically spoken to the souls newb who asks for advice on game forums, resonates throughout gaming discourse. “Souls-like” and “The Dark Souls of” are practically synonymous with video game difficulty, and the conversation around it.

But when FromSoft released Elden Ring this year, I loosely followed the fan subreddit, and found that elitism was not nearly as common as reputed. The phrase “git gud” was rarely used, and only then as a joke–and not a funny joke either, but the kind everyone else would groan at. Perhaps I’m looking at the wrong fan-sites, but my impression is that the fans have moved beyond elitism. They have come to recognize that, actually, it would be great if more people enjoyed this series, so that they could make more of it.

It’s possible that fans and critics and have overcorrected for past elitism, now declaring that Elden Ring is FromSoft’s “most approachable game yet.” Other critics have pushed back, highlighting how the game can still be unfriendly to newcomers. To explore this issue, I present two reviews from different perspectives.

END_OF_DOCUMENT_TOKEN_TO_BE_REPLACED 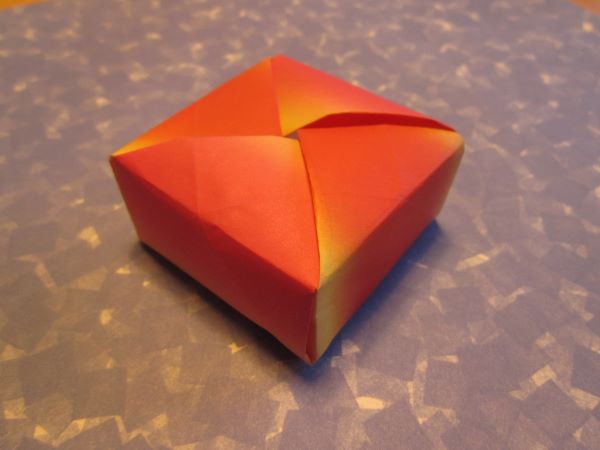 Some readers are interested in origami that they can actually make themselves.  The trouble with that is that many of the designs are quite complicated, or it’s difficult to get instructions that can be shared.  For original designs, it can take hours to draw diagrams even for relatively simple designs–and most of them are not very simple at all.  Other designs I get from books, and the diagrams are under copyright!  And for many designs, the only available instructions are the crease patterns.

Today I present a design that I happen to have diagrams for.  This closed square origami box is not my design, but I couldn’t find diagrams so I drew up some myself.  Someone also made a video.  Diagrams below the cut.