The big headline about the 2020 Census is the declining White population, not just as a percentage, but also in absolute numbers. But this can be a bit confusing, because there are multiple White categories. The “White Alone” category refers to people for whom White is their only racial category (but they may or may not be of Hispanic, Latino, or Spanish origin), and has declined from 72.4% in 2010 to 61.6% in 2020. But if you look at all people who identified as White, regardless of other racial identification, there was a more modest decrease from 74.8% to 71%. And, if you take the White Alone group and exclude Hispanic/Latino/Spanish people, the shift was from 63.7% to 57.8%. And if you exclude groups like Jewish Americans, Middle Eastern Americans, and North African Americans, then we just don’t know because the Census classifies them as White.

These are all big shifts, but the most drastic was in the “White Alone” group, including those of Hispanic/Latino/Spanish origin. It appears that a greater fraction of these people are identifying not just as White, but also as another race.

The “Two or More Races” category is a US Census construction, composed of people who identify with more than one of the racial categories. There are six racial categories: White, Black or African American, American Indian and Alaska Native, Asian, Native Hawaiian and Other Pacific Islander, and Some Other Race. Identifying as more than one race within a single racial category doesn’t count, it needs to be at least two of the six major categories.

If you think about it, this category is a bit arbitrary. For example, White Hispanic people are not Two or More Races, because the Census does not consider Hispanic to be a race (with exceptions, but we’ll get to that). It also depends on how individuals construct their racial identities. Black Americans, and Native Americans typically have some White ancestry, but may think of themselves as just Black or just Native American, and may say so in the Census. In contrast, it’s hard for me to imagine a lot of White/Asian people marking themselves as Asian only.

The Two or More Races category increased from 2.9% in 2010 to 10.2% in 2020. Within this category, 57% are specifically the combination White and Some Other Race. 12% are White and American Indian or Alaska Native. 9% are White and Black or African American, and 8% are White and Asian.

The big question is, what is Some Other Race? 90% of the people who identify as Some Other Race have Hispanic, Latino, or Spanish ethnicity, so the best guess is that people are identifying with a Hispanic, Latino, or Spanish group as a race, not just as an ethnicity. When they do so, the US Census classifies that as “Some Other Race”.  Although the Census instructs people, “For this census, Hispanic origins are not races,” that really doesn’t stop people, and good for them.  It’s like what I said about Q8 of my Cat Person or Dog Person survey, if you include prescriptive definitions in your survey, respondents will be confused and may outright disagree.

This could be a shift in how people are identifying–perhaps the Census’s prescriptive delineation of ethnicity and race increasingly disagrees with people. On the other hand, it may also have to do with a change in question design. Here are the 2010 and 2020 race questions side by side: 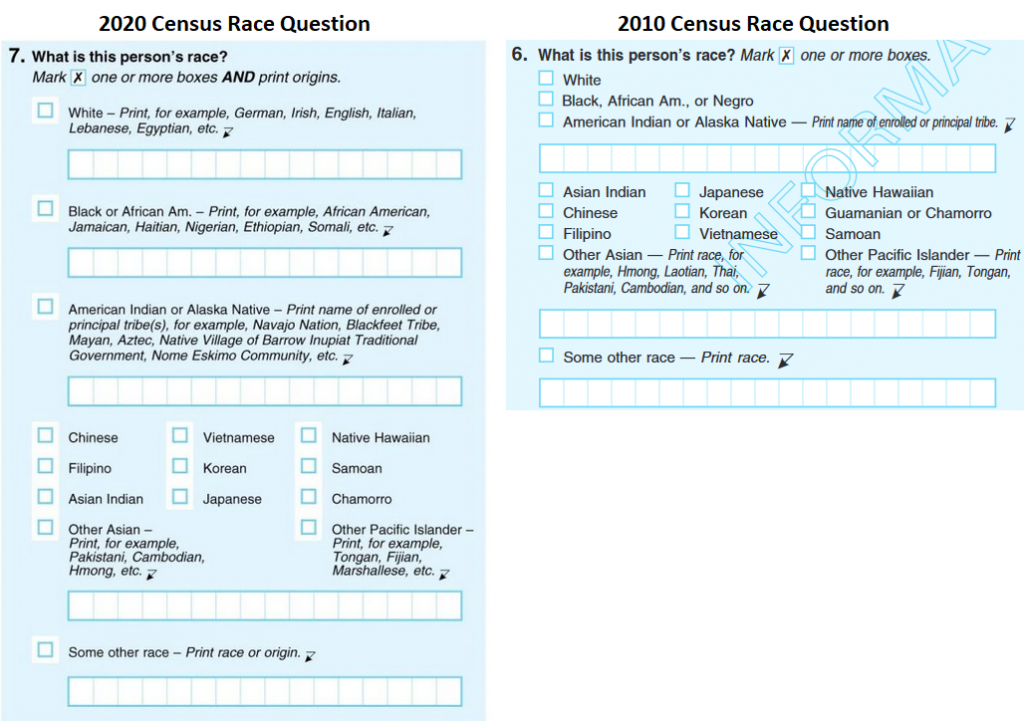 This is pure speculation, but I think asking people who select White to be more specific likely prompts people to write answers like “Mexican” or “Argentinian”.  The Census is not abundantly clear on this point, but I suspect the Census is classifying these as Some Other Race, even if they’re written underneath “White”.

In addition to the change in question design, there’s also an improvement in how they code written responses. In 2010, they coded up to two categories per text box, and Hispanic/Latino/Spanish categories were given lower priority because those are not considered races. In 2020, they coded up to six categories, and they prioritize left to right. So it’s possible that even if people answered identically in 2010 and 2020, they would be classified differently.

My next question, is what’s happening with the White and American Indian or Alaska Native? Is it a shift in population, shift in identity, or a shift in question design and coding? I just don’t know.

The US Census shows an increase in racial and ethnic diversity in the past decade. But we should keep in mind that at least some of the diversity was already there, and is only newly revealed. And there is yet more diversity that the US Census continues to conceal.