How the Iterated Prisoner’s Dilemma Works

The Prisoner’s Dilemma has the following payoff matrix: 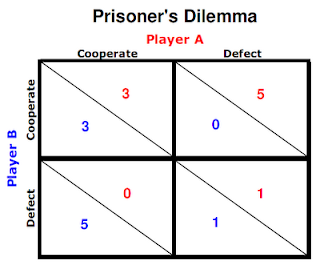 Image credit: Blank On The Map

A simple strategy is to have a certain flat probability of cooperating. However, in the Iterated Prisoner’s Dilemma, this probability could depend on the results of all the earlier games. The simplest case is when the probability depends only on the result of the previous game. Since there are 4 possible results of each game, that means we need 4 probabilities, each between 0 and 1. Thus, each individual has 4 parameters:

The other question is, how many iterations do we play? In fact, it is possible to calculate the average outcome over an infinite number of iterations, using Markov chains. The method is described by Press & Dyson, and it is what I use in this simulation. The catch is that none of the parameters can be exactly 0 or exactly 1, lest the method fail.

The evolutionary trajectory of the population is shown in the video below: 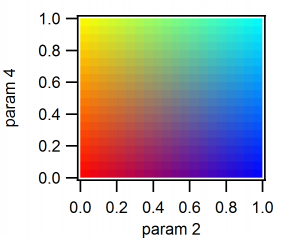 (Apologies that I did not come up with a more color-blind-friendly graphical representation.)

As we can see from the movie, the population is highly unstable, and continues to change even after a million generations. Below I identify several strategies that are similar to ones with common names. There are also many strategies in the video that don’t have any names that I know of. 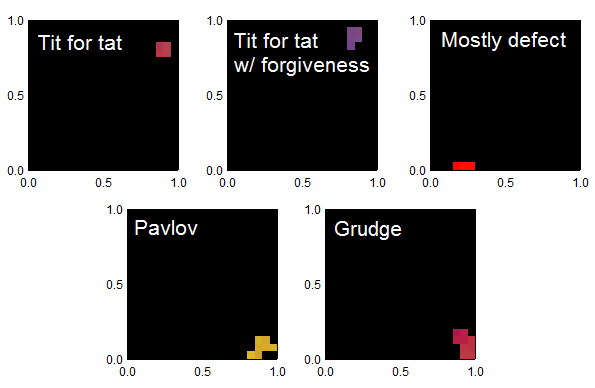 I was worried that the simulation might be unstable simply because the mutation rate is set too high. So I tried the simulation again, adjusting the payoff matrices so that it would use a different game.

First we have Battle of the Sexes. In Battle of the sexes, a married couple is deciding what to do for the night. One prefers to go to the football game, but his husband prefers to go to the opera. However, whatever they choose to do, they both strongly prefer to stay together. In this game, “cooperation” is going with the other player’s preference, and “defection” is going with one’s own preference.

Here are videos of two simulations of the Iterated Battle of the Sexes:

Second we have Stag Hunt. Two individuals go on a hunt. Each can choose to go after a stag (cooperate) or after a hare (defect). Going after the stag offers the biggest payoff, but only if both players choose to hunt the stag. If only one player hunts a stag, then they fail to catch anything, while the other player catches a hare.

Here is the evolutionary trajectory of a population that plays Iterated Stag Hunt:

It seems that the population settles on hare hunting. However, on repeated simulations, sometimes they settle on stag hunting.

Of course, it’s plausible that with different simulation settings and procedures, the population could eventually settle in a stable state. This has been shown in some of the literature. Creating this simulation gave me an appreciation for how difficult this problem is, and why it is the subject of an entire field of research.

More on the food truck game » « On Asian student groups