This is the second part of a series discussing the Fine Tuning argument (FTA). The outline is here.

Previously, I explained how the Fine-Tuning argument assumes this kind of picture: 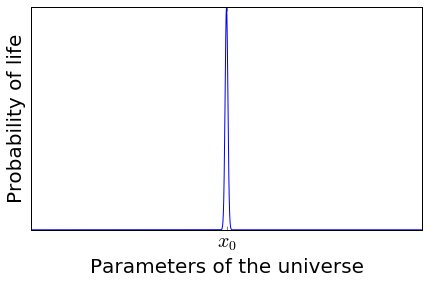 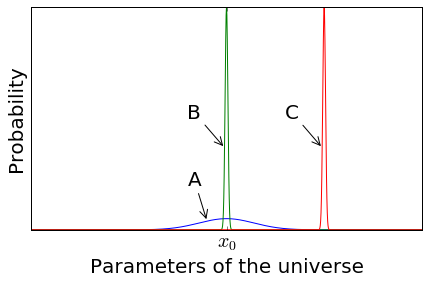 A digression on inflationary theory

I’m going to give this digression the attention it deserves, so sit tight. The above graph is considered evidence for inflationary theory, which is the theory that the early universe had a short period of extremely rapid expansion. No, inflationary theory is not the same as Big Bang theory, it’s an auxiliary hypothesis that says the rate of expansion was way way faster than you’d expect, in a very specific way. The rate of expansion was so fast that the effects of quantum fluctuations became writ large in the cosmos, and can be seen as fluctuations in the cosmic microwave background radiation.

Fluctuations come in all sizes. For example, one hemisphere of the sky could be slightly darker than the other hemisphere. Or maybe the sky is divided into quadrants of alternating light and dark. Or maybe the sky is divided into six parts or ten parts or several thousand. The multipole moment (ℓ), shown on the horizontal axis of the graph, is a mathematically precise way of talking about how large a fluctuation we’re talking about. ℓ=1 divides the sky into two parts, and ℓ=1000 divides the sky into much smaller parts.2 There are multiple possible fluctuation “modes” for each value of ℓ; for instance, there are 3 distinct modes with ℓ=1, and 2001 distinct modes with ℓ=1000. So for each value of ℓ, we look at all the modes, and take the average fluctuation strength in those modes.

Returning to the FTA

The case of inflation is not unlike the FTA. We start with a theory, we use that theory to predict a probability distribution of outcomes, and show that the probability is sharply peaked, and our observations fit within that peak. There’s nothing unreasonable about this argument structure.  Although, you might have noticed a couple differences.

Second of all, if the fluctuations in the cosmic microwave background radiation were different, we could still be around to observe it; whereas if the parameters of the universe were different, then by hypothesis, we would would not be around to see it.  It seems that there might be some kind of selection bias at work.

These two differences will be addressed in greater depth in parts 3 and 4, respectively.

1. For the people who like Bayes expressions, the first graph in this post is showing P(L|x), where L is the statement that life exists, and x is the parameters of the universe. The second graph is showing P(x|H), where H is your hypothesis (i.e. either naturalism is true, or God exists). (return)

2. The multipole moment is mathematically identical to concept of angular momentum in atomic orbitals. The s orbital corresponds to ℓ=0, p to ℓ=1, d to ℓ=2, and f to ℓ=3. When I say that ℓ=1 divides the sky into two parts, that’s analogous to how p orbitals have two lobes. But the number of lobes is not completely determined by ℓ. For example, some of the d orbitals have 4 lobes, but one of the d orbitals has only 3 lobes. (return)

3. One observation that we’re all eagerly awaiting is that of the BICEP telescope.  They are looking not only at the strength of the cosmic microwave background radiation, but also the polarization.  You may recall that BICEP announced proof of inflation in 2015, but that was retracted, and their results are currently inconclusive.  (return)