This is (the last) part of my series about symmetry in origami. 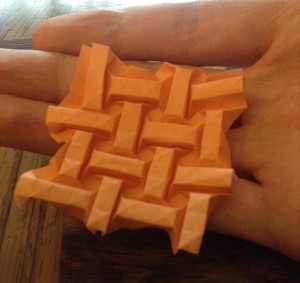 An example of an origami tessellation, the Rectangular Woven Design by David Huffman

An inventory of symmetry transformations

This is the most basic kind of transformation, the kind that does absolutely nothing. Not too exciting, but it still counts.

Next, we can think about how to combine the three basic transformations. This is more difficult than it first appears, because often the result of two basic transformations will just be another basic transformation. You might have noticed that when I rotated the F, the center of the F moved, because there’s no reason I have to rotate the F around its own center, I can rotate it around any axis. So if you try a rotation followed by a translation, what you get is just another rotation around a different axis.

These translations can be hard to represent in 2D, so I took photos of a 3D object, a flip-flop. 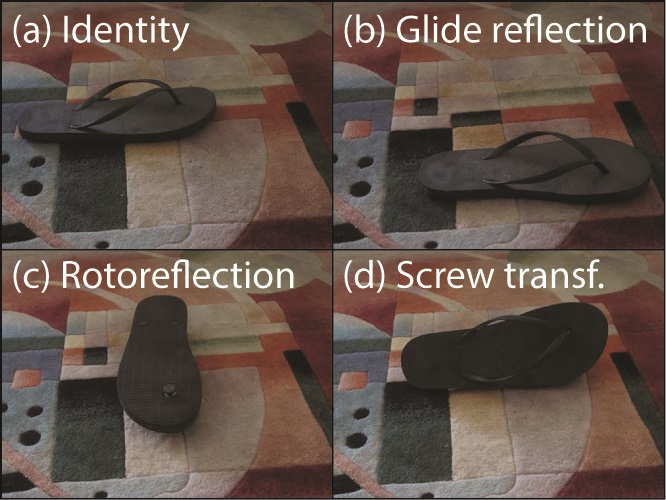 There’s one last type of transformation: inversion. This is when you reflect an object about a point instead of a plane. Really, inversion is just a special kind of rotoreflection, where the rotation is exactly 180 degrees. But along the same lines, you could say that the identity transformation is just a special kind of rotation, where you rotate by exactly 0 degrees. Let’s just say that inversion is special, and deserves to be put in a separate category.

Previously in this series, I was always talking about symmetries of finite objects. Thus, we didn’t allow any symmetry transformations which would move the center of the object. Rotations and reflections are okay, as long as you rotate/reflect about axes/planes that intersect with the center of the object. Rotoreflection and inversion were allowed too. But there was no translation, no screw transformation, and no glide reflection.

How many? I’m not sure, but it’s more than 17. 17 is the number of “wallpaper groups“, the symmetry groups of repeating 2D patterns. (There are also 7 “frieze groups“, which make patterns that repeat only along 1 direction, but I don’t count those.)

Why do I think there’s more than 17? Because here is a tessellation that has a symmetry group that is different from any of the wallpaper groups.

The front and back of the Reverse Square Tessellation, a model of my own design

If you take this model, translate it by a little bit, and then reflect front to back, then you get the same pattern again. In the wallpaper groups, there’s no notion of reflecting front to back, thus this is not a wallpaper group. So the number of distinct origami tessellation symmetry groups is somewhat more than 17.  If I ever figure out how many there are, I’ll write an appendix.

This is probably the last post I’ll write in this series (except for that appendix). I know it was a bit rough to follow at times, but that’s what happens when I’m trying to figure things out for myself as I go. If I ever revisit these topics in the future, I’m confident I will be able to explain them more clearly.

A few key points to close out: