An intermission from the presidential horse race

The Senate, on the other hand, never redraws its district lines. Instead, each state elects two senators. The state lines are the result of gerrymandering from a long time ago, but at least aren’t under the power of current politicians. Unfortunately, that means that the Senate is never proportional to the population sizes of the states, and heavily favors rural regions.

Although the Senate is blatantly unrepresentative of the US, the House arguably has it worse. Not to put too fine a point on it, but you can tell by how Republican the House is. Although Hillary is winning the popular vote and Democrats are likely to win Senate majority, the House will comfortably remain under Republican control.

Clearly this gerrymandering process is fairly powerful, but how does it work? If you’d like a hands-on approach, The Redistricting Game is a browser-based game that walks you through it (unfortunately it’s Flash). Gerrymandering is also illustrated in this graphic from The Washington Post: 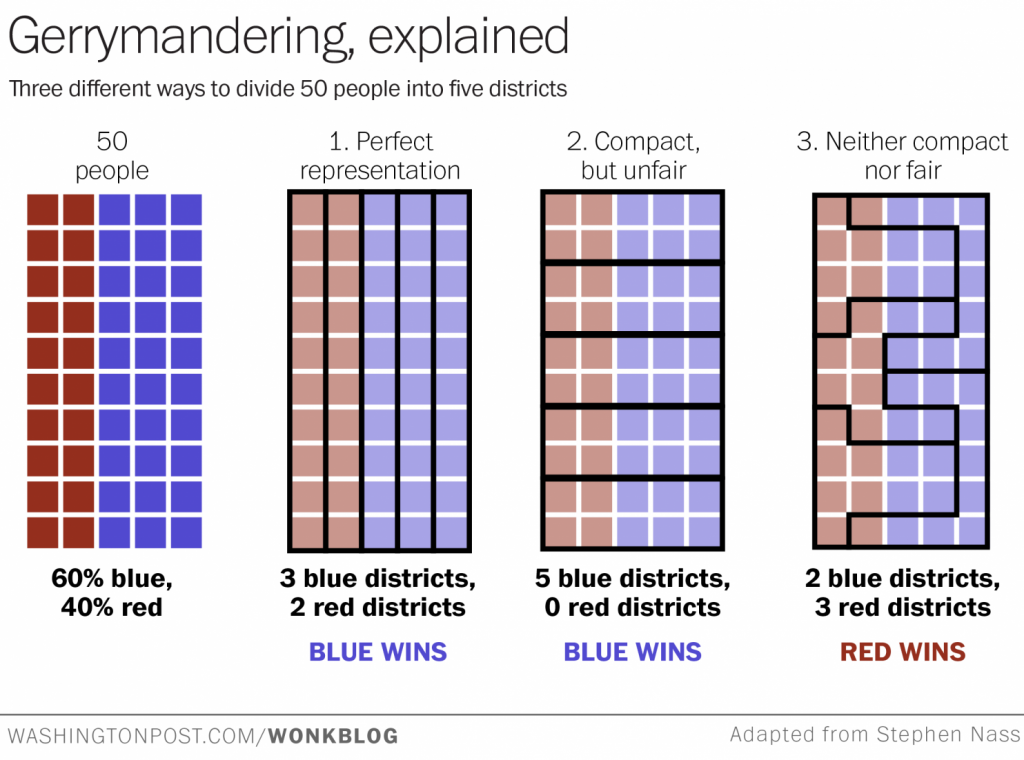 Partisan gerrymandering consists of drawing district lines in such a way that the favored side gets more seats than they rightly deserve. This is usually done with a combination of packing and cracking. Cracking means splitting the opposing voters into several districts where they have slightly less than 50% of the vote. Packing means gathering the opposing voters into a few districts where they have a very large share of the vote. I indicate the packing and cracking in the image below: 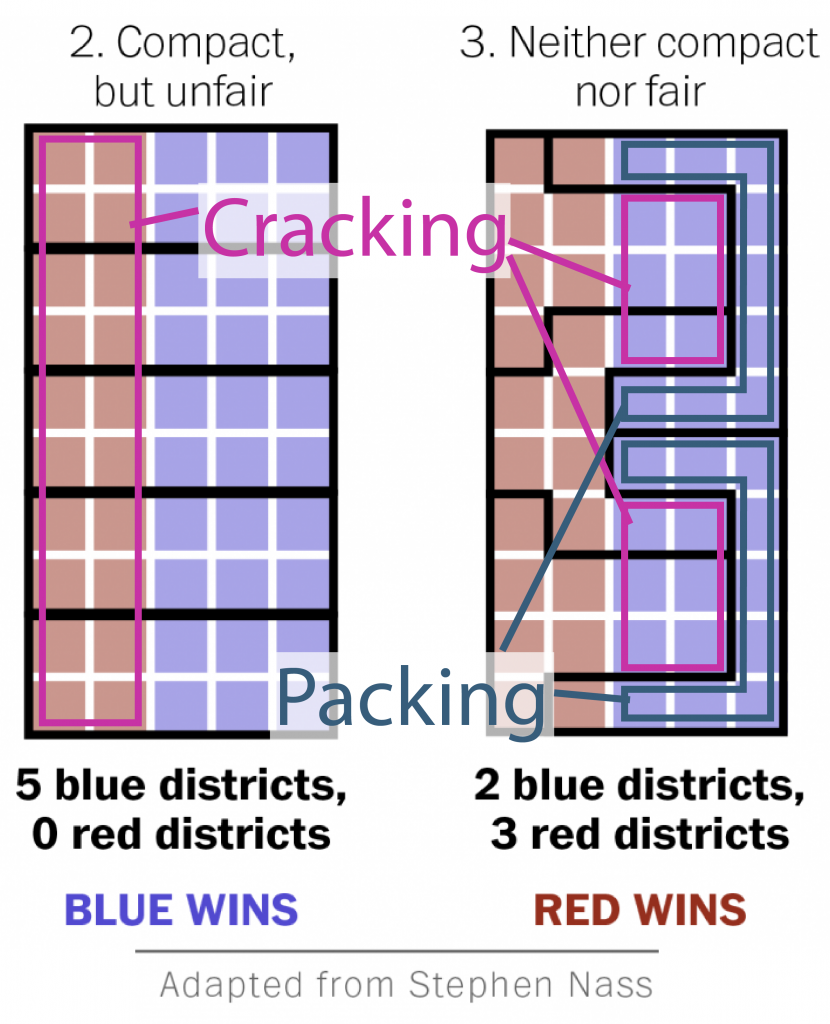 Not all gerrymandering is necessarily so easy to detect. Another very common form is bipartisan gerrymandering, which seeks not to favor one party over another, but to favor incumbent candidates. Both parties select districts such that their reelection is virtually guaranteed. In the Washington Post image, the middle left diagram is labeled “Perfect representation”, but it looks to me like it could be an example of bipartisan gerrymandering. After all, both blue and red representatives are guaranteed to win their respective districts.

The problem with countering gerrymandering is that it’s hard to define what fair districts should look like.

One solution has been to look at gerrymandered districts, and observe that they often have funny shapes. Thus, in some US states, districts are required to be compact, i.e. not funny-shaped. While compactness enforces an arbitrary constraint that limits intentional gerrymandering, there’s no particular reason why compact districts should be fair either. For example, in the middle right WaPo image, a set of compact districts favors the blue party.

Another idea is that fair districts should preserve regions that are geographically, demographically, and culturally distinct. Along those lines, the Voting Rights Act of 1965 prevents districts from needlessly splitting ethnic minorities. The rules on this are not especially clear, and there appears to be a history of Supreme Court cases about it.

It would be interesting to see new laws use the efficiency gap, but I have a few complaints about it. First, it only addresses packing and cracking, and not any other kinds of gerrymandering (including things I didn’t even mention). Second, the least competitive districts probably have a lower voter turnout, which would bias the measure. Third, I find it mathematically weird that a party with 60% of the votes receives 70% of the districts when the efficiency gap is eliminated.

A few states, including my own, have implemented another solution: non-partisan redistricting commissions. Obviously this doesn’t address how the commission “should” draw the districts, but at least there’s no longer the obvious conflict of interest that occurs when politicians draw their own districts.

Don’t forget to vote for members of congress!

Take my survey! » « Made in Criticalland