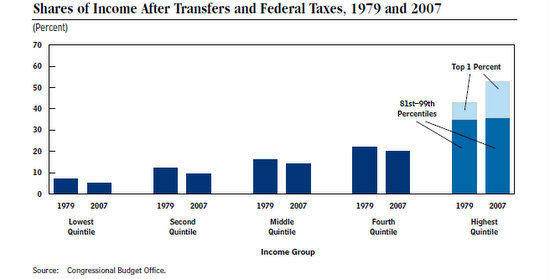 That’s a chart showing income as market share for all quintiles of earners from 1979 to 2007. All quintiles lost ground except for the top quintile, and if the top one percent is backed out of that quintile, even they went nowhere. Of course merely mentioning this constitutes class warfare. Click image for analysis and commentary at Daily Kos Labor.

A high school civics teacher in the state of Florida is facing serious consequences for, get this, teaching students approaching voting age how to properly register to vote. In an election. In a democracy.  END_OF_DOCUMENT_TOKEN_TO_BE_REPLACED

Last month I got hurt bad enough to spend several days in the hospital, during which time I got a bunch of expensive treatment and tests. The bills have started rolling in now and one of the larger ones had two numbers on it: the $13,000 and change I would have owed vs the roughly $5,000 the hospital accepted as payment in full. The latter represents what my insurance company had pre-negotiated with medical venders. There’s a lesson here, a big one, because it involves saving individual people thousands of dollars, and saving taxpayers billions and billions. END_OF_DOCUMENT_TOKEN_TO_BE_REPLACED

Governor Rick Perry has released some details of a flat-ish tax plan which critics say weakens Social Security, complicates the tax code and raises tax for the vast majority, but, to no one’s surprise, heavily favors the super rich and multinational corporations. One of the weirder features the plan creates a parallel tax code. That detail and others already have some conservative economists panning the plan widely: END_OF_DOCUMENT_TOKEN_TO_BE_REPLACED

How’s that for framing? Tax the class-holes that destroyed the economy and created the worst unemployment since the Great Depression, and then demanded We the People bail them out with a trillion dollars, right before claiming they should have special privileged status to pay a lower tax rate than teachers and troops:

The Senate majority leader, Harry Reid, Democrat of Nevada, said the surtax would raise $445 billion over 10 years, just about the amount needed to pay for the jobs bill. Mr. Reid said his proposal would “have the richest of the rich pay a little bit more” — “5 percent more to fund job creation and ensure this country’s economic success.”

Of course conservatives won’t go along with it, or even let it come up for a vote in the House. That’s fine: that’s the whole point of proposing legislation like this. To make it crystal freakin clear who’s on the side of 99% of us and who’s on the side of the Job Destroying 1%.