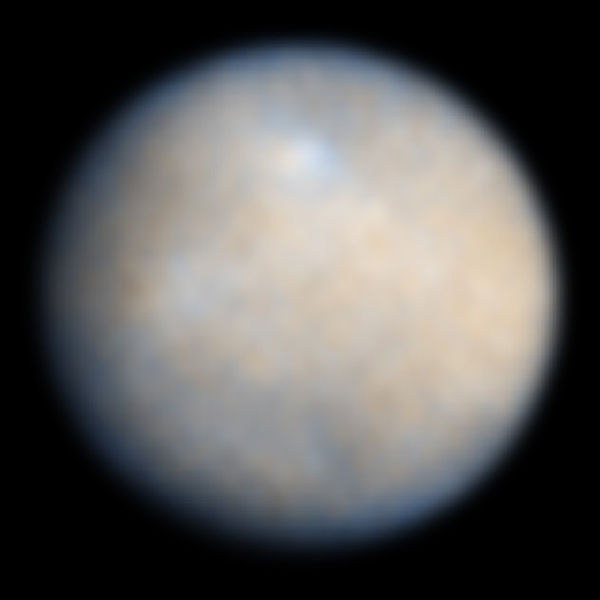 The headline to the link article below is a bit over the top. It reads “Is there life on Ceres?” The answer is, we have absolutely no way to know that because that pic above represents the best we’ve got. Ceres is tiny, distant, and dim. But our knowledge of this enigmatic world is about to change radically:

NBC — “This is what you might call the ‘smoking gun,'” Mark Sykes, CEO and director of the Arizona-based Planetary Science Institute, told NBC News. “The implications could be huge for the future of astrobiology and planetary exploration.”

Sykes wasn’t involved in the Nature study, which is based on data from the European Space Agency’s Herschel Space Observatory. Nevertheless, Ceres is close to his heart: He’s a co-investigator on the $466 million Dawn mission and has long suggested that the dwarf planet might possess subsurface liquid water — and perhaps even traces of life. Reservoirs of water
The findings from Herschel don’t go nearly that far, but they do provide the strongest evidence yet that Ceres contains reservoirs of water ice. Past missions turned up indirect evidence for water, but nothing conclusive. It took Herschel’s sensitive HIFI infrared detector to pick up the spectral signature of water vapor, apparently emanating from two dark spots on Ceres’ surface.

At first this puzzled me with visions of ice geysers like we’ve seen elsewhere. Ceres is a free orbiting dwarf planet with no known satellites and way out from the sun. There can be no tidal flexing, and you’d think water-ice near the surface would have either escaped over the last four billion plus years or be safely sequestered away.

But all Herschel detected was minute traces. So if that’s confirmed, it sounds like it’s wafting out very slowly in tiny amounts. And Ceres lays right on the boundary of the solar system’s frost line, the point where incidental insolation falls below the freezing point of water. Eccentricity in its orbit could tip it back and forth just enough that some small traces of water escape. Plus, Ceres is a in violent neighborhood with no atmosphere to ward off even smaller objects. A few hits by objects on the order a 100 meters every million years or so would sure stir things up. Ceres also rotates about once every nine hours. Pretty fast. Between that and the low gravity, just under 3% earth normal, you could easily build a space elevator around Ceres with existing materials.

But what’s important is there is probably water just below the surface, perhaps a good bit. Water is useful, it’s the solution for all of life as we know it, not to mention it contains oxygen and hydrogen which are also both very useful to space exploration. NASA’s Dawn spacecraft will arrive in mid Feb of 2015 and we’ll probably start getting better images a few months beforehand.

Cosmos series reborn » « Pastor tries on atheism for a year