Going through that nerve-wracking, humiliating ordeal while the national discourse was tainted with delusions and wanton cruelty emanating from (usually) ultra-conservative critics, many of whom proudly profess a belief in the principles of mercy and charity as conveyed by their savoir Jesus Christ, ranks among the most surreal, gritty , at times truly Orwellian experiences in my life. That rare kind of personal intrusion, where news ceases to be a TV show and suddenly leaps out from my screen, with intent to harm on par with an armed thug suddenly crashing through the front-door. After a glitchy roll out, and no end of Teaparty whining about people like me having an affordable option to preserve our health, the news this week has markedly improved for Healthcare.gov:

Reuters — Facing its first big test since officials proclaimed over the weekend that they had met their deadline to make HealthCare.gov run smoothly for the “vast majority” of users, the site performed markedly better than it did during its disastrous launch two months ago – but was still short of the crisply running insurance marketplace Obama once touted.By 5:30 p.m. EST, the website had logged 750,000 visitors, the White House said, nearly the 800,000 daily users the refurbished site is supposed to be able to handle.

In states such as New Jersey, Pennsylvania, Alabama, Texas and North Carolina, the rush of traffic led to the deployment of a new feature on the site – a waiting page that said there were “a lot of visitors right now,” and put people in line to be serviced, usually within minutes. By Monday evening, officials reported that the site was running smoothly, with no waiting.

November metrics were likewise a big improvement over October.

Bloomberg — About 100,000 people signed up for health insurance through the online federal exchange last month, a roughly four-fold increase from October even as a team of U.S. government and contractor programmers was fixing the troubled Affordable Care Act website, said a person familiar with program’s progress.

The preliminary November numbers reflect individuals who successfully selected a plan. The administration expects that most consumers will sign up early next year as the enrollment period nears its March 31 close, said the person who asked for anonymity because the final numbers were still being calculated.

After two months of software errors and delays that have threatened the success of President Barack Obama’s signature health law, the administration said yesterday that it met its self-imposed deadline and the site, healthcare.gov, is working smoothly for the majority of users. The fumbled rollout forced the administration to scale back its original enrollment targets of about 800,000 for the first two months.

My understanding is that’s just private policies written via the federal website in Nov. All told, between state run exchanges and the Medicaid expansion, my rough math shows over half a million people have signed up for Obamacare in the last two months. Extrapolating, it’s a solid bet that that total figure will accelerate over the next two months. 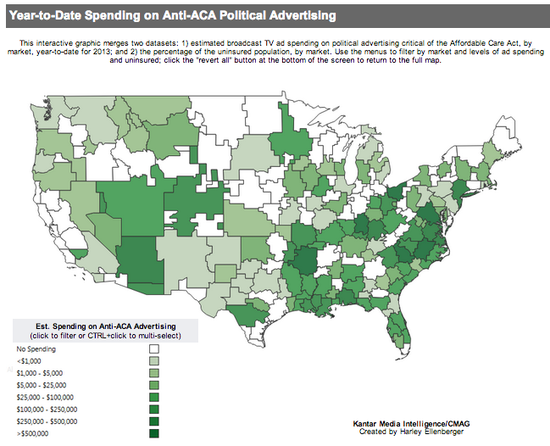 Above is a linked interactive map showing where the conservatives spent the most money trying to swindle voters out of affordable health insurance. Notice the states most often hit by anti-ACA ads are exactly those with the highest number of uninsured and the full cruelty of the far right is laid bare. But don’t think for a second they’ll give up in the face of a functional website or even a popular program One ripe vector for attack once the care kicks in beginning Jan 1 will be the care itself: we’ve all been put through the insurance company wringer in one or another, getting authorizations for diagnosis and treatment, over coming bureaucratic obstacles and insurance weasels That  is tilled, fertile ground ready for seeds of contempt for Obamacare. That insurance companies play those deadly games regardless of this or that policy, or that, indeed, Obamacare has eliminated or restricted some of the worst industry practices therein, matters not a wit.

Mr. Non-believer goes to Washington » « The system that FTB built: One case to house it all