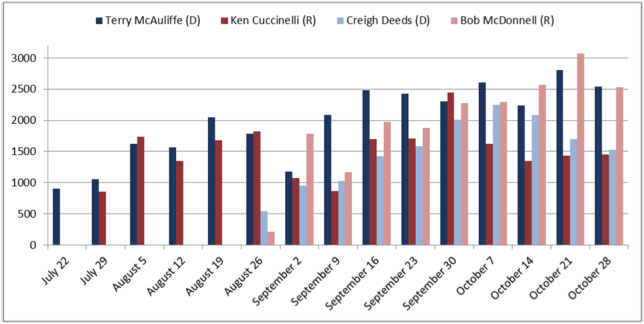 Time is definitely going by faster as I age. It seems like only a couple of months ago that we were electing a President and now it’s that time of year again. There are a number of interesting races worth following, starting the VA governor’s race between Terry McAuliffe and the Cooch. This should be a no brainer, Cooch is running against both all kinds of reproductive rights and oral sex just to name a couple of nutty and dangerous positions the man holds. But it’s closer than it should be:

WaPo — There are lots of reasons that Democrat Terry McAuliffe is poised to beat state Attorney General Ken Cuccinelli in the Virginia governor’s race on Tuesday. But, none is more important — or, perhaps, undertold — than McAuliffe’s massive fundraising advantage over the Republican nominee.

As of Oct. 23, McAuliffe had raised north of $34 million while Cuccinelli had brought in just $19 million. By comparison, Republican Bob McDonnell had raised $21 million at this time in the 2009 race while Democrat Creigh Deeds had collected $16 million. (McDonnell won with 59 percent.) McAuliffe’s almost two-to-one fundraising lead translates into one very important thing: lots and lots more ads.

This race perfectly encapsulates why I vote for and support democrats almost exclusively these days. McAuliffe is a bit on the boring side, plus he’s somewhat spineless and opportunistic. The only reason he’s on the side of the issues I agree with is because that’s his party’s platform. He’d switch in a herat beat to pick up three points. I don’t trust guys like McAuliffe as far as I can throw them.

But Cooch is an anti-science, anti-women, class-war waging Bible-thumping over-pious know-nothing asshole who courageously defends the rich and powerful against the weak and powerless at every turn, the absolute worst in modern conservative politics. Not to mention, everything the establishment GOP represents, deregulation, tax cuts for the rich, privatizing schools, etc., every last damn thing they push has been demonstrated to back-fire with catastrophic consequences.

It’s an easy choice and I hope the polls are right. Throw in the fact that McAuliffe will expand Obamacare and bring tens of thousands of Americans life-saving healthcare they don’t have and which some have never had, and it becomes imperative. On a personal note, not only do I I hope Cooch loses, I hope his loss further collapses the entire mountain of social conservative rot he stands astride into an all out war civil war between the scheming greedy pigs on the business side who dragged us into the Great Recession with promises of prosperity and the know-nothing thugs who enabled them while waving rebel flags.

Father Cruz is a creationist, too » « Those who fool us