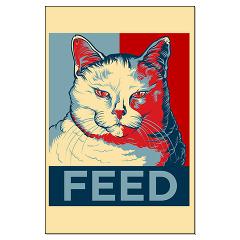 My friend John Cole over at the excellent sight Balloon Juice lost his cat unexpectedly last night. Cole’s cat Tunch, named after former Pittsburgh Steelers offensive tackle and two-time pro-bowler Tunch Ilkin, was a most unlikely bloggy superstar. But because his antics were posted to a high traffic site on a regular basis, thousands of people from all over the world grew to appreciate him. He even appeared on T-shirts.

There are a lot of things that attracted me in the early years to Balloon Juice. Cole’s journey to political awareness mirrored my own in many ways. He started out as a relatively apathetic center-right Republican and, over time, moved toward the center. As the malfeasance during the Bush admin grew, Cole was able to examine his own beliefs and rather quickly came to cast off the conservative trappings that snare so many for life. Today he may call himself a moderate progressive, or he may not as I really don’t know, but based on most every issue I’ve seen him write about he comes across like a well informed, raging lefty. Another appealing feature is Cole will let fly, with a rare mix of passion, love, and anger, on people, places, and things he cares about. Plus he’s done a great job of recruiting like-minded writers who do the same and with whom he does not always agree with.

By the edge of a woods, at the foot of a hill, Is a lush, green meadow where time stands still.
Where the friends of man and woman do run, When their time on earth is over and done.

For here, between this world and the next, Is a place where each beloved creature finds rest.
On this golden land, they wait and they play, Till the Rainbow Bridge they cross over one day.

No more do they suffer, in pain or in sadness, For here they are whole, their lives filled with gladness.
Their limbs are restored, their health renewed, Their bodies have healed, with strength imbued.

They romp through the grass, without even a care, Until one day they start, and sniff at the air.
All ears prick forward, eyes dart front and back, Then all of a sudden, one breaks from the pack.

For just at that instant, their eyes have met; Together again, both person and pet.
So they run to each other, these friends from long past, The time of their parting is over at last.

The sadness they felt while they were apart, Has turned into joy once more in each heart.
They embrace with a love that will last forever, And then, side-by-side, they cross over… together.

I like that poem for a lot of reasons. Here, it might be good to point out that it offers comfort to those grieving, something religion is still capable of, regardless if the underlying cosmogony is valid or not. But it brings up another point, anyone remember when you would ask if dogs go to heaven as a child, and the answer would be no?

Heaven was only for people, or so we were told at a young, impressionable age, often while burying our best, furry friend. Yet another crushing let down thanks to the modern day rigidity of Bronze-age based mythology. Probably there is some convoluted scholarly thought on why this would be. Maybe something like animals are not born in sin, i.e., there is no animal equivalent of that traitorous bitch Eve, they cannot/do not accept salvation through Christ, and therefore cannot be saved for eternity.

That’s crazy of course. But then heaven has many strange restrictions, clauses, and properties. Kill toddlers, screw their corpse, then roast them for dinner all before their captive mother’s horrified eyes, and don’t worry if you are caught! Simply mumble a few magic words prior to being executed, and you are welcome in heaven for eternity! Where I imagine your version of paradise would have to include plenty of infanticide-necrophilia or it could hardly qualify. But heaven forbid if one of those terrified moms died in her sleep from stress before inciting the same spell, or dared to commit suicide rather than be subject to more torture! Why these are offenses in the eyes of God-eh! Offenses so foul, so unforgivable, that that mom deserves to be tortured for eternity.

Any creature that would let such a conditions exist, despite being able to end with the wave of a magic hand, is worse than the serial baby killer. And we’re supposed to fall to our knees and worship that kind of monster?

While we’re on the subject, loss doesn’t always happen all at once, death is not always as fine a dividing line as our goat herding farmers believed thousands of years ago. People lose parts during life. Does the body of a diabetic in late stage PAD reassemble in the hereafter as it reduces here on earth? How does that work for Alzheimer’s or massive stroke or traumatic head injury, is there a cognitive assembly holding tank in Sheol somewhere along the way, where bits of mind and matter patiently await the final pieces before magically reforming themselves into the whole person and moving on to heaven?

What kind of paradise could immortality be without those abilities we had at our prime, or all those creatures, human or animal, who have touched our lives in the past? How could heaven be heaven, for us, without them?

I suppose the threat and promise of an afterlife, hellfire and paradise in many religions, served it’s grisly purpose for Caesars and Pharaohs at one point, just as it has for suicide bombers and cannon fodder more recently. But it doesn’t work any more. We are growing up as a species and part of growing up is taking responsibility for our collective fate.

If we want a paradise, the only sure fire way we’re going to get it is to make it ourselves, “down here,” here and now. And if we want longer, healthier lives, maybe one day hundreds or thousands or even millions of years longer, we know what fields of study will most likely pay off there, too. In that paradise, dogs and cats will be welcome.