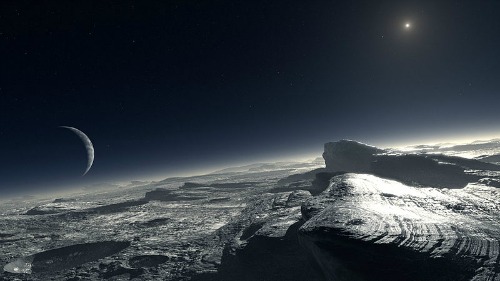 The debate about Pluto’s planetary status has simmered down, although I was always partial to the way Alan Stern, the Director of New Horizons mission to Pluto, explained it to me: it’s just a dwarf planet. We don’t call a small dog a different species just because they’re small, we just call it a miniature, something like that makes sense for Pluto and its cohorts like Sedna or Ceres. But we now know Pluto has two new moons, or dwarf moons or moonlets if we want to extend the debate, and SETI wants your help naming them!

LINK — Here is your chance to help out the scientific community. All you have to do is come up with the winning names for two of our solar system’s moons. The SETI Institute is asking for the public’s help to name two recently discovered moons orbiting the dwarf planet Pluto. Right now, astronomers are using the names “P-4” and “P-5” to identify the tiny moons.

The scientists who first spotted the moons are asking people to submit ideas for names, which will then be offered to the International Astronomic Union. That is the worldwide group of astronomers who make final decisions on naming any stars, planets and other extra-terrestrial objects in our solar system.

Can’t think of your own name? You can also choose from a group of names astronomers already came up, like Acheron, Hypnos or Styx. You can see that list of names or send your naming ideas by going to this website (URL: http://on.wews.com/XGh4s3).

That makes me a sad panda » « Surprising move by Pope