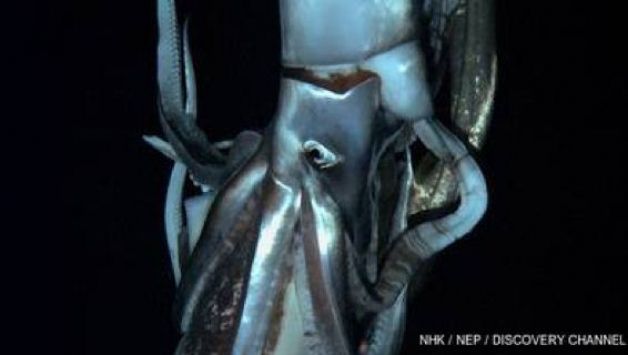 Release the kraken! Or rather the video of same. Soon my hairy mammalian siblings, soon. Because that’s what the Discovery Channel now has in their hands after years and millions of dollars spent to film the incredibly elusive monster deep in its native habitat for the first time:

The famed and often maligned giant squid has for millennia kept its quiet life in the depths of the ocean private, but now the Discovery Channel and Japan’s national museum say they’ve Paparazzied the sucker. The duo is claiming to have the “very first ever footage of a live giant squid in its natural habitat,” according to its joint press release.

The squid, said to have razor-toothed suckers and eyes the size of dinner plates, was encountered in the “abyss” after more than 285 hours and 55 submarine dives, some as deep as 3,000 feet below the surface, the team said.

The giant squid is better known to marine biologists as Architeuthus of the family Architeuthidae. It is the largest known extant cephalopod, at least in terms of size, pushing almost 50 feet from the tip of the rocket like mantle to the club on the end of the longest tentacles. With teeth on its giant suckers, basket-ball sized eyes, and beak-like mouth that could lop off head-sized chunks of live struggling prey, the giant squid is quite the sci-fi monster come to life and quite literally the stuff of legends. The Greek Scylla and the Norse Kraken were both probably inspired in part by rare encounters of giant squid and no doubt terrified sailors in open water.

Cephalopods likely evolved during the Cambrian more than half a billion years ago from a specialized mollusk similar to a modern day limpet. Within a 100 million years they had grown huge, first with slender nose cone like shells and then hitting on the coiled shell geometry, becoming a wildly successful group of extinct animals called ammonites. Ammonites bit the meteoric dust at the end of the Cretaceous 65 million years ago leaving behind beautiful iridescent fossils, some of them taller than grown men. But most modern squid still retain an internal shell called a gladius revealing their ancestral roots. The squid’s close relative, the octopus, went on to discard that shelled ancestral vestige and as a result can squeeze though any opening larger than its beak, the only hard remaining part on the entire animal.

Enormous squid have been reported throughout history and gained a near mythical status among European explorers along with mermaids and unicorns. They were subsequently confirmed as “real” when dead ones washed ashore and were described and dissected in the 20th century. Getting a live one on the record in its natural environment has been the holy grail of natural history film making for years. But it was only in the last decade that the first photos of live specimens were captured by researchers.

Discovery Channel’s “Monster Squid: The Giant Is Real,” premieres on Sunday, Jan. 27 at 8/7c as the season finale of Curiosity. Click here for more on the Discovery homepage.

Today: AIG considering (Passes) suing US government for bailing out AIG » « There’s something wrong with the universe