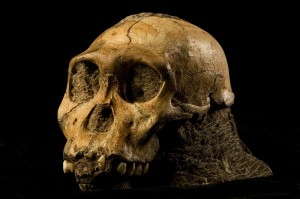 A site first discovered by the nine year-old son of a fossil hunter in 2008 just keeps on giving. The Malapa has produced some of the most complete human ancestor fossils ever discovered, and some of the final missing pieces were just found in a boulder sitting quietly in a lab for the last three years. Until a researcher noticed what looked like a hominid tooth protruding from the rock:

TG Daily— The new additions to the original find make the skeleton – dubbed Karabo – astonishingly complete. Once the remains, encased in a rock about one metre across, were noticed, they were examined with a CT scanner.

“We have discovered parts of a jaw and critical aspects of the body including what appear to be a complete femur (thigh bone), ribs, vertebrae and other important limb elements, some never before seen in such completeness in the human fossil record,” says Professor Lee Berger of the University of the Witwatersrand in Johannesburg.

“This discovery will almost certainly make Karabo the most complete early human ancestor skeleton ever discovered. We are obviously quite excited as it appears that we now have some of the most critical and complete remains of the skeleton, albeit encased in solid rock. It’s a big day for us as a team and for our field as a whole.”

It couldn’t have happened to a better set of specimens. From day one, the young discoverer and his father stated they believe these remains belong to all of us, and have made sure high quality casts were made and distributed as fast as possible, so that the specimens would be available to paleo-anthropologists the world over. This new find will almost certainly be handled the same way.

Maybe Romney took too much LDS in the 60s » « Did Romney perjure himself?