While the dinosaur Tyrannosaurus Rex is huge, its arms are surprisingly small and this has been a puzzle for scientists. This article describes the search for an explanation ever since the discovery of fossil remains of the dinosaur in 1902 by a team of paleontologists led by Barnum Brown from the American Museum of Natural History, an institution that was headed by Henry Fairfield Osborn. 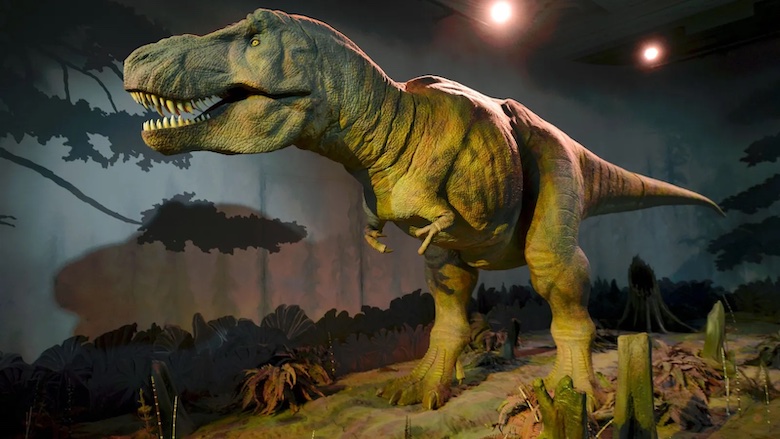 But right from the beginning, one aspect of these kings of the “tyrant lizards” was deeply mysterious: their puny arms. Brown’s T. rex skeleton was missing all its fingers and both its forearms, which were drawn on early portraits using surprisingly accurate guesswork – prompting speculation that they surely couldn’t really be that stumpy. What could have been their purpose? And how did they end up being so small?

Bizarrely, they were. Today T. rex is almost as famous for its withered little arms as for its enormous teeth – they’re so totally out of proportion, they almost look like they’ve been plucked from another species and simply stuck on, in a throwback to the hilarious blunders of bone assembly from the 19th Century (such as the time Stegosaurus’ signature diamond-shaped back plates were added to its tail instead).
…

With arms that might measure just 3ft (0.9m) long on a 45-ft (13.7m) individual, this formidable carnivore’s hilariously small appendages have been a source of intense speculation ever since they were discovered – despite decades of studying them, to this day no one has any idea what they’re for.

The article goes on to describe the slow accumulation of fossil discoveries that accompanied the theories about the size of the arms.

One early idea came from Osborn, who gave T. rex its name. “He saw these very small, curiously tiny arms and made a comparison with small fins that that are present on modern-day sharks, says Scott Persons, head curator of the Mace Brown Museum of Natural History, South Carolina.
…

Another, potentially comical, possibility is that T. rexes may have used their little arms to get up off the ground. With up to 15,500lb (7,031kg) bodies – equivalent to the weight of a large African elephant – they may not have found it easy to manoeuvre out of a resting position, or get back on their feet in the event that they fell over. (Many living animals struggle with this to this day, such as tortoises, which often rock themselves upright when they end up on their backs.)
…

Another controversial idea, put forward by a single scientist in 2017, is that adults like the Wankel Rex may have used their stubby arms as weapons – perhaps holding their victim in their jaws or pinning it down with their bodyweight, before ripping and slashing at it. Underpinning the idea is that though they’re tiny, T. rex’s arms are surprisingly muscular. He calculated that even with its 3ft (0.9m) limbs, these eviscerating actions could have done some serious damage, creating gashes several centimetres deep and at least a metre long in a matter of mere seconds.
…

However, there is also the possibility that they had no function whatsoever – T. rex’s tiny arms were the last vestiges of once-useful appendages that had long ceased to be necessary.
…

An alternative is to use basic physics.

Intriguingly, one of the latest ideas is that the dinosaur king’s arms may have withered to their shrunken form to serve an important purpose – there was a reason they needed to be so puny. It’s possible their small size helped them to have the most enormous head and powerful bite possible: the bloodcurdling silhouette of the average T. rex was no accident.

It is possible that we may never fully understand the reason for the small arms but that the fascination with the question will continue.

Alas, it’s also possible that we may never know the true function of T. rex’s arms. Like discovering the long-tubed passion flowers of North and South America without finding the hummingbirds that dip their long beaks into them, sometimes the context you’d need to understand a feature has been lost to the fossil record. After more than 66 million years – in which time volcanoes have sprung up and gone extinct, islands have been formed and lost, and tens of thousands of species have come and gone – the nuances needed to understand certain behaviours may be too far gone to unravel.

All this interest in the odd arms of an animal that went extinct 66 million years ago may seem odd. But apart from curiosity about something so intrinsically interesting, Persons thinks he knows why. “We human beings are probably a little bit too preoccupied with the importance of our arms and our hands, because they’re so gosh-darn critical to our survival,” he says.

As the primary way we interact with our environment, it’s hard to imagine giving them up on purpose. “And here we’ve got this incredibly successful, very scary-looking, animal, and it seems to want very little to do with them,” says Persons.

The idea that the arms were becoming vestigial and that if the dinosaurs had not gone extinct, may have eventually evolved away so that these huge animals became like land sharks, is fascinating.