Inflation has been high recently, not just in the US but in many parts of the world. How inflation is calculated is to take a basket of goods and calculate their cost and see how they change over time. In the US, there are two inflation indices: regular inflation and what is called ‘core inflation’, which omits food and fuel from the basket because those tend to fluctuate more over the short term and thus introduces volatility.

Whichever index you choose, whenever the inflation figures are reported each month in the US, Kevin Drum complains about the fact that it is the year-over-year number that is reported. He says that this gives a misleading picture of whether there is inflation right now and that a month-to-month comparison would be better.

To sharply illustrate his point, I have made a chart of hypothetical costs for a basket of goods for three years: X, X+1, X+2. 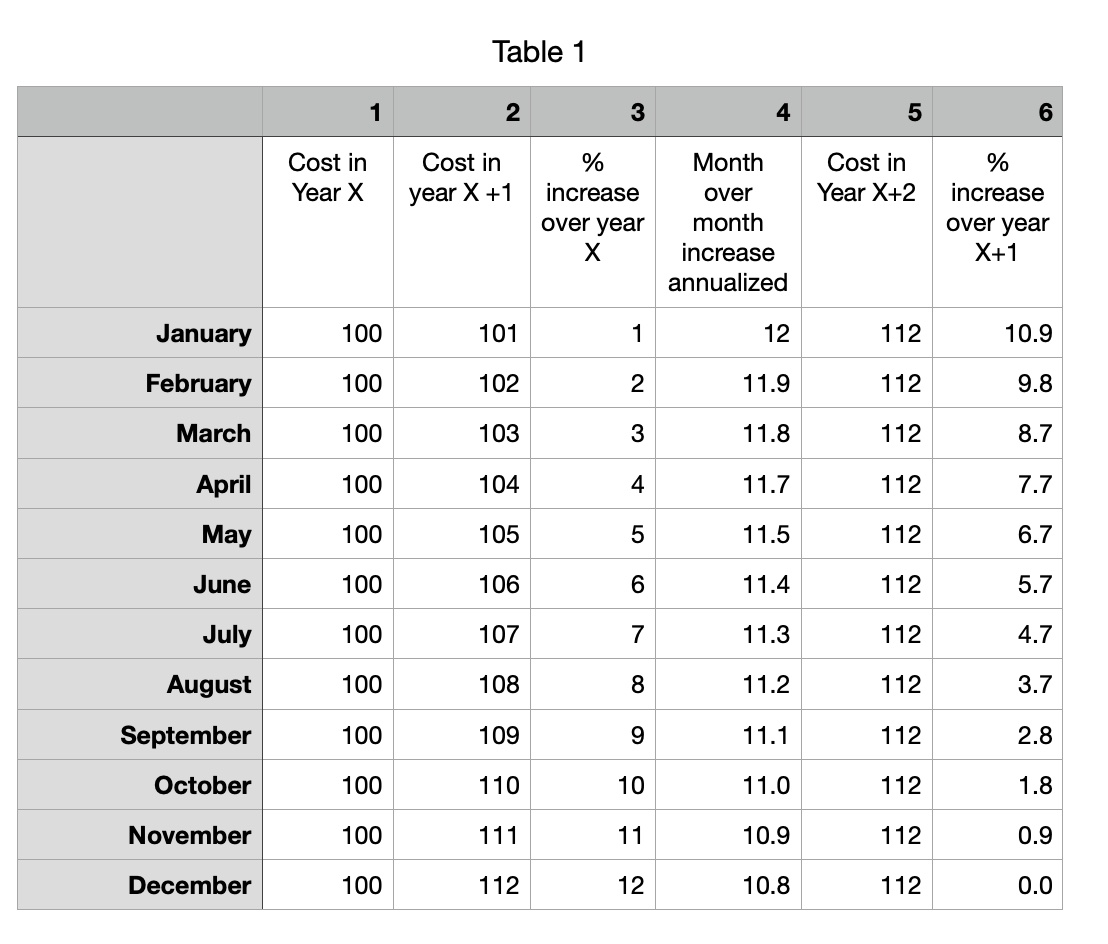 In the year X (column 1), the prices remain flat at 100 for the entire year. i.e., the inflation rate is zero.

Starting in year X+1, the prices go up by one unit each month (column 2). We see in column 3 that the year-over-year inflation figures rose from 1% in January to 12% in December. But we can also calculate the month-over-month increases (annualized) and that is given in column 4.

Now assume that prices suddenly stopped increasing for the entire year X+2 (column 5). In other words, inflation has ceased altogether and the month-over-month inflation is zero. But the year-over-year figures will still be high, though decreasing gradually until it reaches zero in December (column 6). This is because the earlier rises have been baked in to the costs.

Drum argues that the month-over-month inflation number gives us a better idea of current inflation. In the real world, since year-over-year inflation has been steadily decreasing since around June of this year, he argues that this is because inflation has actually already stopped and that the numbers that are reported are the baked-in earlier increases. By reporting only the yearly figures, people think that inflation is still raging.

I think that there is some value in the year-over-year inflation figures so it should not be dispensed with. Perhaps the solution is to report both, so that we get a better idea of the state of inflation.

Film review: Glass Onion (2022) (No spoilers) » « Not everything is a symbol of one’s political persuasions