I have noticed that a large number of comic strips feature non-human animals. Some of these animals behave as one expects them to do, in that they express themselves in the way that animals do by using their bodies, wagging their tails and so on. In the case of others, the animals are anthropomorphized to various degrees. At one end, the creators put in thought bubbles to indicate what they are thinking, though they cannot talk. This clearly appeals to pet caregivers who have often wished they could know what their pets are thinking. Other comic strips have animals and pets seemingly living and working together and able to converse with each other. And then there is the other extreme in strips where only animals appear and they live just like humans do.

I have been wondering about why cartoonists introduce anthropomorphized animals. Is it funnier when they do the kinds of things that humans do? Somehow that does seem to be the case though I cannot put my finger on why.

Take for example, the daily and Sunday strip called Sherman’s Lagoon. Its characters consist of aquatic creatures, the key ones being two great white sharks Sherman and Megan. The main characters are sharks, turtles, and crabs and they form a community just like humans. It all takes place under the sea except that the water seems to play hardly any role at all, and in fact would make pretty much everything impossible. Take this recent strip. 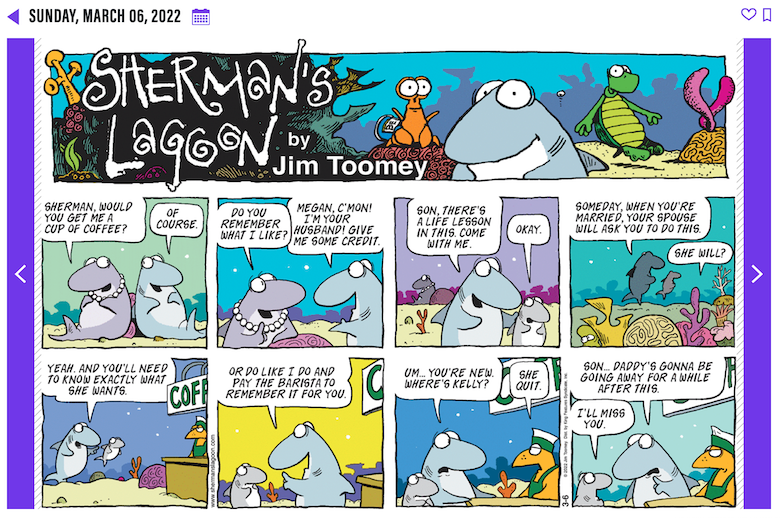 It is a testament to the power of art to get the audience to suspend reality that we can quickly come to accept the impossible that one can have a coffee stand underwater.

Only rarely does the fact of who they really are and where they live enter the story.

For the most part, the strip’s characters respond to killing prey to eat with indifference or coldness, as much of the plot revolves around what Sherman and Megan are going to eat for dinner. For instance, one comic had Megan declaring she was in the mood for Italian and the two sharks immediately sought to find an Italian swimming in the water. Also, a large group of tourists swimming in the lagoon is referred to as ‘the buffet’. Poodles are regarded as a delicacy, and Sherman regularly eats smaller fish that swim by. One strip saw a fish committing suicide by swimming into Sherman’s mouth while he yawned. Characters have also been seen going to shark-themed restaurants. (‘Leg of Pam’, ‘Bloody Mary’s, and ‘Beans and Frank’ have been named from the menu.) However, on one occasion Megan pulled a tourist under, then let him go unscathed, thus practicing her method of catch and release.

It may be the case that that kind of darker story arc happened earlier in the strip’s history (it originated in 1991). I came across the strip only in the local Monterey newspaper after I moved here in 2019 and there have been no stories of the sharks eating people or other fish, only occasionally scaring them. It has all been very wholesome.

I am particularly impressed by this strip because it is funny and so far out there. I would love to meet the creator and ask how it came to be that he thought of placing all the action underwater and what elements of reality would have to be kept and what jettisoned. That takes quite a feat of imagination.

What’s with the fascination with designer clothes? » « Rebels without a clue