In the case of the Spanish flu pandemic of 1918, most of the deaths occurred during the second wave of the disease that occurred towards the end of that year and it was feared that the current pandemic might follow a similar pattern. That fear may be coming true. This graph tracks the number of new confirmed cases per week in the US for the current pandemic.

The graph shows how the curve in the US reached the first peak of 223,000 on April 10th, then dipped a little before shooting up to 471,000 on July 22, then falling again to 240,000 on September 12, and is now steadily rising again, with the current value at 366,000, well above the first peak level back in April. If one ignores the small first dip, then we are now in the second wave. Otherwise we are in the third wave. (What I have shown above is a screenshot taken from an interactive dynamic website. To get a graph, dates, and numbers for any country, you need to go to this website and select the country and the linear scale.)

In the case of the UK, the first dip occurred on July 3 but has skyrocketed since then, with the current value at 111,000, way higher than its first peak value of 34,000 back on April 10.

France and Spain show patterns similar to that of the UK.

As a whole, the number of cases in Europe is rising faster than in the US. This graph shows that yesterday marked the first time when the average number of new daily cases (per million residents) in Europe has equalled that of the US. 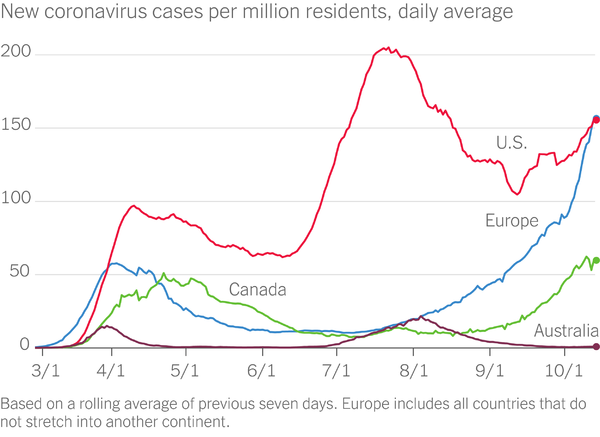 Compare this to China which had its first peak of 32,000 cases per week back in February 14 before dropping to almost zero by March 24 and staying there.

If one wants to see at least a little silver lining for the US (if one could even call it that), we can look at the number of confirmed deaths. After the first peak of 16,000 per week on April 24 it dropped to a low of 3,600 on July 6 before rising again to a second peak of 8,000 on August 1. It now seems to have plateaued at about 5,000.

While the fact that the death rate in the US is not rising is something, a plateau is simply not good enough. At that rate, we would have a total of 300,000 deaths by the end of January. We have to bend that curve down quickly.

Meanwhile the Wold Health Organization has issued an ominous warning that within months the number of cases could rise to as high as five times the peak we saw in April. That would be terrible.