It is clear that Bernie Sanders is worrying the Democratic party that he might win the nomination. While the stated reason for their concern is that he is too ‘left’ to be elected, I think it goes further than that. I think they are more concerned that if he does become the nominee, he will dislodge the entrenched neoliberal control of the party. It seems like the establishment sees Barack Obama as their main weapon to stop them and are waiting for the right moment to ask him to stop progressives from gaining ascendancy, a skill that he has displayed in the past. Back in November of 2019, when Sanders’ campaign seemed to be waning, Obama seemed willing to stay out of the picture.

Publicly, he has stated that he won’t intervene in the primary for or against a candidate, unless he believed there was some egregious attack. “I can’t even imagine with this field how bad it would have to be for him to say something,” said a close adviser. Instead, he sees his role as providing guardrails to keep the process from getting too ugly and to unite the party when the nominee is clear. There is one potential exception: Back when Sanders seemed likely to be a threat than he does now, Obama said privately that if Bernie were running away with the nomination, Obama would speak up to stop him. (Asked about that, a spokesperson for Obama pointed out that Obama recently said he would support and campaign for whoever the Democratic nominee is.)

Obama has already made clear his concerns about the party going too far left, a criticism that both Sanders and Elizabeth Warren have rejected.

Democratic 2020 presidential candidates have rejected criticism from former president Barack Obama, after he warned the field of White House hopefuls not to veer too far to the left because it would alienate voters.

Though Obama did not mention anyone by name, the message he delivered before a room of Democratic donors in Washington on Friday was a clear word of caution about the candidacies of Senators Elizabeth Warren and Bernie Sanders, who are seen as two of the top-tier candidates in the crowded field.
…

Addressing Obama’s comments over the weekend, Sanders told a forum in Long Beach: “I’m not tearing down the system.”

“When I talk about health care being a human right and ending the embarrassment of America being the only major country on earth that does not guarantee healthcare for every man, woman and child, that’s not tearing down the system,” he said, according to the New York Times. “That’s doing what we should have done 30 years ago.”
…

As for Warren, the candidate who has tried to bridge the worlds of Sanders and Obama, Obama’s relationship with Warren is famously complicated. Back in early 2015, when Warren was considering running for president and started to excite progressives, Obama said privately that if Democrats rallied around her as their nominee it would be a repudiation of him—a clear sign that his economic decisions after the Great Recession had been seen as inadequate. There are very few former senior Obama officials in Warren’s campaign.

The recent rise of Sanders just before the Iowa primary may change his calculation. Fox News is goading Obama to get involved.to stop Sanders.

It is interesting how when the Democratic front runner is a center-right politician like Joe Biden, the party establishment says that the most important thing is to quickly close ranks and unite behind the nominee so as to achieve the main goal of defeating Donald Trump. But they then become coy about this when it looks like Sanders may be the nominee.

Fox News is goading Obama to get involved.to stop Sanders. So far, he seems to be resisting the push.

Not surprising but I guess worth reporting: actual sources in Obama world are giving a collective LOL to the idea that he is considering putting out a statement warning against Bernie. 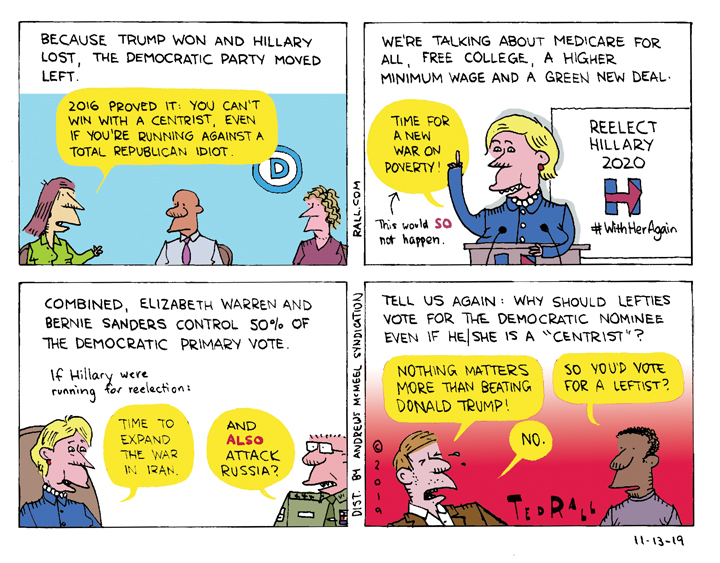 Democratic centrists say nothing is more important than defeating Donald Trump. That’s their argument, again, for why progressives should support a centrist Democratic nominee. But it’s not like progressives suffered when Hillary Clinton lost or that they would be better off if Hillary Clinton were running for reelection today.