In yesterday’s post about the book Moneyland that exposes how the ultra-wealthy who want to find a safe haven for the money they laundered frequently choose the option of buying mansions in the most pricey cities, not to live in but as investments. This article looks at Bishops Avenue, an exclusive street in London known as ‘Billionaires’ Row’, that now features multi-million dollar homes that have been bought and remain unoccupied so that they are falling apart, creating what is effectively one of the world’s priciest slums. 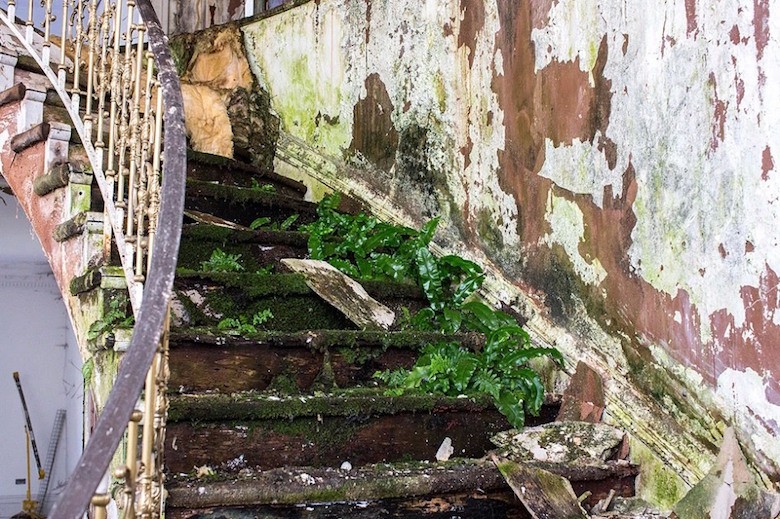 The entire neighbourhood is owned by the super-rich, ranging from Saudi princes to East European arms dealers to Indian business magnates. Yet, no one ever lives here for more than a few weeks each year. Most have been left to the staff who looks after the properties while the owners are away. Others have never been occupied. Several huge properties have fallen into ruins after lying vacant for more than 25 years. These once expensive homes are in a terribly bad shape with peeling paint, rotting carpets, water streaming down bedroom walls, collapsed ceilings, and ferns growing between broken floor tiles.

One property owner, the developer Anil Varma, called the avenue “one of the most expensive wastelands in the world.”

Among the unoccupied properties are a row of ten mansions, worth £73 million, which was bought by the Saudi royal family during the Gulf War as a place to escape to in case they were deposed. That never happened, and consequently the houses are largely unused. Another house belonged to a Kazakh businessman accused of a $6 billion banking fraud. The property was seized following a high court judgment. The former Pakistani minister of privatisation, Waqar Ahmed Khan, also held a property here, but it was repossessed by the bank. Its windows are now bared with heavy iron bars.

Many properties are registered to companies in tax havens including the British Virgin Islands, Curacao, the Bahamas, Panama, and the Channel Islands, allowing international owners to avoid paying stamp duty on the purchase and to remain anonymous.

This short film takes us inside some of these vacant properties to show the level of decay.

How even lousy political books can become best sellers » « How unethical do you have to be to resign from the Trump administration?