As if the other results were not bad enough for Donald Trump, we have the case of Juli Bricksman, a cyclist in Virginia, who in 2017 was being passed by the Trump motorcade and took the opportunity to flip him off. 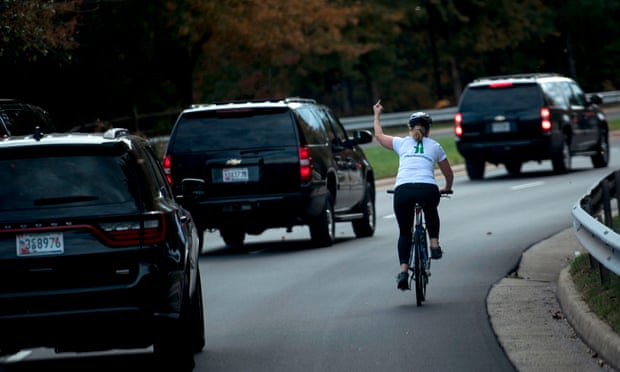 She later explained why she did it.

“It was just sort of like, here I am on my bike. I’ve got nothing, right?” Briskman told the Guardian in November 2017. “This is pretty much the only thing I had to express my opinion. He wasn’t going to hear me through bullet-proof glass … So that was pretty much how I could say what I wanted to say, right?”

She was promptly fired from her job at a firm that contracts with the government, maybe because our system is now so petty that the company feared that a low-level employee making a gesture aimed at Trump might result in them no longer getting government contracts. Or maybe the reason is even more petty and the firm’s owners or managers are ardent Trump supporters.

It turns out that she was one of the winners in yesterday’s Virginia election, winning her race for a seat on the Loudoun County board of supervisors. She used her viral photo as a key part of her campaign.

And in a sign of how divorced from reality some Republicans are, a woman took the microphone at the campaign headquarters of losing Republican Kentucky gubernatorial candidate Matt Bevin and announced that he had won, about 20 minutes after a local TV station had said that he had lost. She then whooped it up with the crowd cheering along until some official cut off her microphone, though that did not stop her talking into it until she was gently escorted off the stage.