The role that money plays in US elections is obscene. As a result, the strength of a campaign is not only measured in terms of poll numbers but also in terms of how much money is raised and spent by each candidate, which in turn influences the polls.

The Biden campaign is currently in a little bit of financial trouble in that the amount of money it has in hand is far less than that of his main rivals Bernie Sanders and Elizabeth Warren, even though the contributors to the Biden campaign are big money contributors. As a consequence, despite his vow not to take money from lobbyists and Super PACs, his wealthy supporters and lobbyists are forming a Super PAC to fund his campaign, as Lee Fang reports, funded by wealthy people who are concerned about people like Bernie Sanders and Elizabeth Warren winning the nomination and (Oh, the horror!) even the presidency.

In an effort to revive Biden’s prospects, prominent supporters of the former vice president are mobilizing to establish a Super PAC, a bid that the Biden campaign appeared to endorse on Thursday, according to a report in Bloomberg. The move represents a reversal from earlier this year, when Biden rejected support from Super PACs, which can receive unlimited donations from corporations or individuals.

Though Biden has pledged not to take contributions from registered lobbyists, the prohibition appears not to apply to big-dollar organizers of his Super PAC. Among the individuals involved with the effort are several lobbyists for leading corporations and foreign governments.
…

As The Intercept has reported, despite Biden’s promise to reject lobbyist money, his campaign launched with a fundraiser hosted at the home of Comcast’s chief lobbyist, and his political action committee has a long record of accepting lobbyist cash.
…

But this time may be different. Bernard Schwartz, a wealthy financier who has organized dinners with prominent centrist Democrats in order to prevent Sen. Bernie Sanders, I-Vt., from gaining the Democratic nomination, is reportedly in talks to fund the new Super PAC. Schwartz is known for deep-pocketed donations. In 2016 alone, Schwartz, through his foundation, gave $1 million to Third Way, a centrist group backed by corporate donors that has vigorously opposed Medicare for All and other ideas centered on tackling economic inequality.

Biden himself in 2007 pointed out the corrosive effect in politics of big money contributions, how it buys access.

“The front of the line is always filled with people whose pockets are filled,” said Biden.

Perhaps aware of how this looks, Biden is holding a big money fundraiser in Pittsburgh next month that his campaign has not publicized.

Biden entered the race pledging not to take money from lobbyists, but has held numerous fundraisers with them. He pledged not to take fossil fuel money, but recently held a fundraiser in New York hosted by a fossil fuel executive. And last week, Biden’s campaign reversed its pledge to reject money from super PACs, appearing to endorse a move by several of his prominent supporters to mobilize to establish a political action committee, Bloomberg reported.
…

Pearls Before Swine has had many strips on the theme of how corrupting big money is on elections, such as this one. 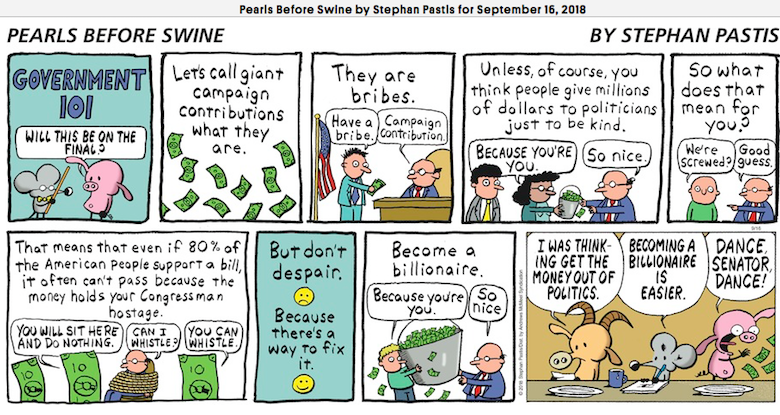 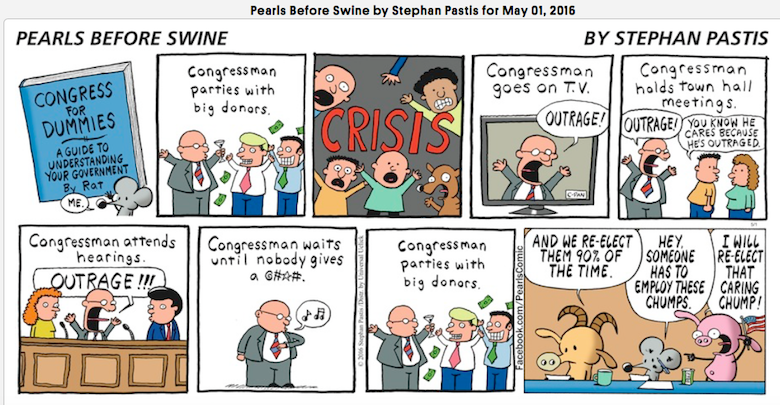