One big sticking point in getting a Brexit deal that will be agreeable to the EU and can get passed by the UK parliament is what to do about the border between Ireland and Northern Ireland. The UK leaving the EU means that Northern Ireland would also leave while Ireland remains in the EU. That would seem to require a customs and tariffs barrier between the two parts of the island, something everyone hates and would be a deal breaker. A proposed deal being worked on by government of Boris Johnson would make the customs and tariffs barrier run down the Irish sea separating the two islands. But this would mean that goods could flow freely across the land border dividing Northern Ireland and Ireland even though Northern Ireland is subjected to UK rules and the Ireland to EU rules.

This has resulted in the proposal of a convoluted solution, as this article explains using the example of a shirt manufacturer in the English town of Leicester that exports their product to both Northern Ireland and the EU. 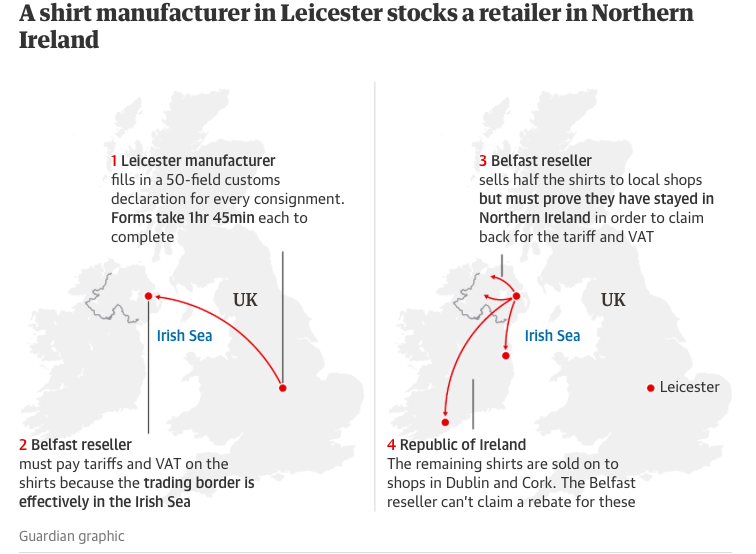 What happens when the goods arrive in Belfast?

The “buyer” or importer will have to pay an EU tariff. This is likely to be collected on behalf of the EU by UK officials, although in time it is likely to be an electronic transaction.

What happens if the importer is also selling that shirt to schools in Dublin?

There will not be any check on the box of shirts as it crosses the border, but the importer will not get a rebate on this consignment if it is sold in Dublin.

Will getting a rebate be easy?

It is not clear how the government intends to proceed with the tariff arrangements but if it works like the Dover-Calais system it will not be easy.

There is no system set up for a seamless tariff pay and refund system that will be the success or failure at the heart of the new Irish backstop. Currently the EU operates a streamlined refund system for VAT known as VIES (VAT information exchange system) across Europe.

There is nothing similar for tariffs, leaving retailers and traders concerned. “People won’t want to pay tariffs upfront and then wait weeks for a refund because it will kill your working capital. It will have to be a seamless invisible transaction,” said Aodhan Connolly, the director of the Northern Ireland Retail Consortium.

I am sure that the negotiators will try to plug all the possible loopholes but as is usual when trying to do a patchwork repair job on something that is fundamentally unsound, plugging one loophole will result in new ones becoming apparent and one can see that this process could quickly escalate into a bureaucratic nightmare for businesses and ordinary people.

All this focus on the Irish issue has taken the spotlight away from the other major problems such as the delays that are expected for goods that once traveled freely back and forth between England and Europe now being subjected to customs and tariffs.

There is going to be a lot of arm-twisting and wheeling and dealing by Johnson to get enough votes to pass this through the UK parliament, assuming that the EU signs off on it. There are already allegations that he has made promises to the DUP, his Northern Ireland ally, in order to get them to overcome their objections to having their ties to the rest of the UK weakened by this move, such as offering them the ability to re-impose at least some of their reactionary policies on abortion and same-sex marriage.

The next few days will see whether this deal passesor not. If the deal falls through, Johnson is required by a law passed by parliament to ask for an extension, something that he has said that he opposes so much that he would rather be dead in a ditch.

So once again, the Brexit mess goes down to the wire.