In his drive to prevent the UK parliament from blocking his attempts to take the UK out of the EU even with no deal, prime minister Boris Johnson has formally asked the Queen to prorogue (i.e., suspend) parliament for five weeks from mid-September. As a constitutional monarch, she had to acquiesce to his ‘request’, disappointing those who fantasized that she might instead ask the royal footman to throw him out on his ear.

Parliament will thus resume on October 14 with the traditional ‘throne speech’, the government’s plan of action for the coming year which the Queen usually reads with all her regalia. All this pomp and ceremony seems a little out of place given the nature of the Brexit crisis but it seems to be part of his plan to run out the clock on the Brexit deadline of October 31.

So what are the options for those who view a no-deal Brexit with horror? Not many, it seems.

The effect of the decision will be to curtail the time MPs have to introduce legislation or other measures aimed at preventing a no-deal Brexit – and increase the pressure on Jeremy Corbyn to table a vote of no confidence next week.

If Johnson lost that vote, there would then be a 14-day period in which the Labour party leader, or an alternative candidate, could seek to assemble a majority. If no new government emerges, a general election would have to be held.

But government sources insist Johnson is determined not to go to the polls before Britain is due to leave the EU. “We have been very clear that if there’s a no-confidence vote, he won’t resign. We get to set an election date. We don’t want an election, but if we have to set a date, it’s going to be after 31 October,” said a senior government source.

As has often been the case with Brexit, one needs a flowchart to understand the process and the Guardian duly obliges. 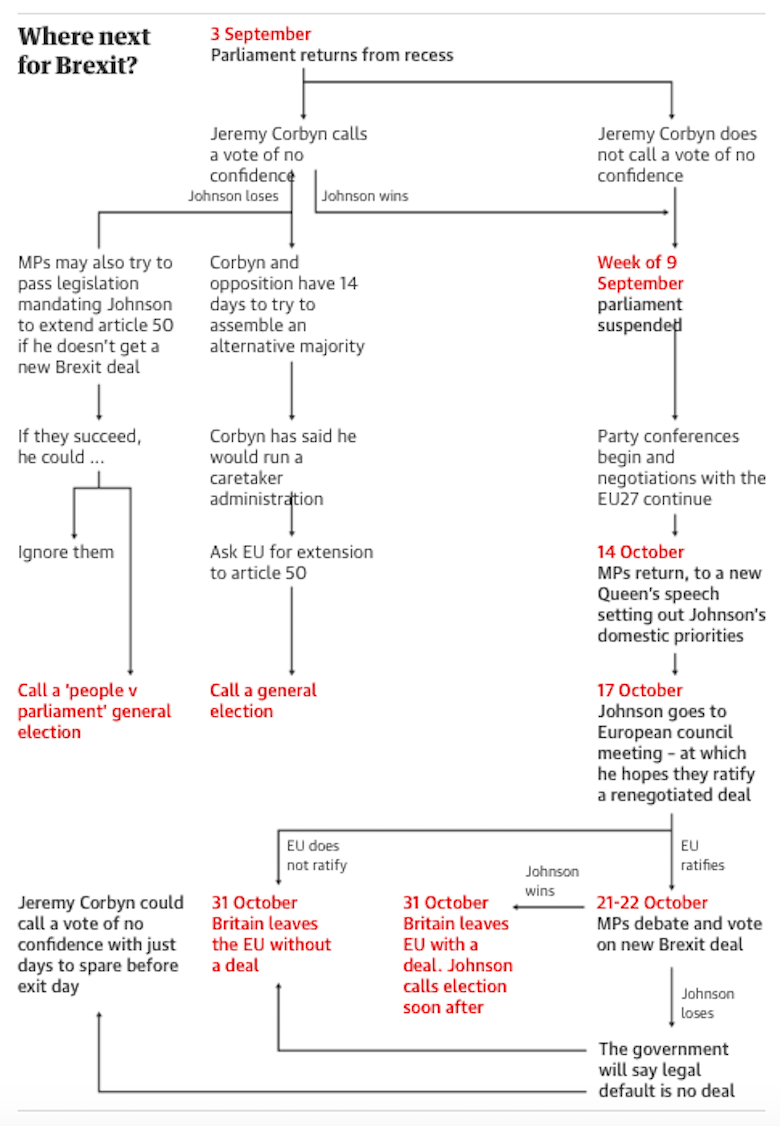 It seems a very short sighted attitude since Brexit would be permanent but a Corbyn prime ministership would be temporary.