I recently watched an old French film with English subtitles. But the timing was very slightly off in that the English words appeared a beat or two after they were spoken. If there were gaps in the dialogue, then one could keep the recently disappeared video image in mind while waiting for the translation to appear. But in quick exchanges, the words that one character spoke would appear when the other person was responding. It was extraordinary how this very slight time lag made it very difficult to follow. My brain found it very difficult to make the rapid adjustments necessary to restore continuity.

I have been similarly disconcerted even when no subtitles are involved but the audio track is slightly misaligned with the video, so that the words and the lip movements of the speaker do not match. Even the slightest difference is very off-putting, which shows how much our brains are conditioned to expect lips and sound to be synchronized and finds it hard to accommodate even slight amounts of asynchrony. 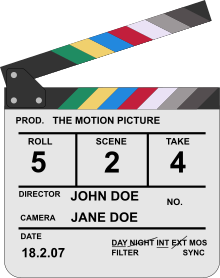 I used to wonder what the purpose of the clapperboard was that I am sure everyone has seen, where during filming someone claps the top down and says ‘action’ to begin filming a scene. It is apparently to enable the film editors to align the sound with the video by exactly matching the sound of the ‘clap’ with the visual. But it looks like even with that system in place, older films can experience misalignment later.