On Monday morning, I was listening to the public radio program 1A and they had on Michael Mandelbaum, an emeritus professor of American foreign policy, about his new book.

Author and professor Michael Mandelbaum argues that the world saw true peace beginning in 1989, with the end of the Cold War.

This peace, he says, ended in 2014. In The Rise and Fall of Peace on Earth, Mandelbaum writes that Russia, China and Iran ended it through aggressive military behavior and policies that pushed nationalism.

Mandelbaum’s thesis is a familiar one that is espoused by American chauvinists, that the US is the great spreader of democracy in the world but that its efforts are constantly being thwarted by the warlike behavior of other countries. If only those countries would stop meddling in the affairs of other nations, we would be enjoying world peace. To his credit, the host Todd Zwillich seemed to find this a bit much, as did many of the listeners who wrote in or called or tweeted to the show, pointing out how the US has been invading countries, supporting autocrats, subverting democracies all over the world, and is constantly involved in many simultaneous wars both overt and covert, hardly signs of a peace-seeking nation. The US currently has nearly 800 military bases in over 70 countries and I suspect that most Americans are unaware that this is the case or have even heard of many of those countries. They probably think that Afghanistan and Iraq and Syria are the only involvement.

Faced with that criticism, Mandelbaum retreated to the familiar position taken by supporters of American imperialism, glossing over all those actions as aberrations or mistakes and that the benign intentions American should be unquestionable. I was so disgusted that I stopped listening after 20 minutes. In fact, surveys taken around the world consistently show that the US is seen as the greatest threat to world peace.

There’s really no way to sugarcoat it: The rest of world believes that the United States is the country that poses the greatest threat to world peace, beating out all challengers by a wide margin.

This is the conclusion of a massive world opinion poll conducted by Win/Gallup International and released at the close of 2013. The poll, which was first conducted in 1977, asked over 66,000 thousand people across 65 countries this year a variety of questions about the world, including which country they would most like to call home, whether or not the world is becoming a generally better place and which country poses the greatest threat to world peace.

The U.S. was voted the biggest threat by far, garnering 24 percent of the vote. Pakistan was a very distant second with 8 percent, followed by China (6 percent) and Afghanistan (5 percent).

Perhaps not surprisingly, Americans had a slightly different view of the international troublemakers, naming Iran the top threat. Yet while Afghanistan garnered the second-most votes among American respondents, they also voted the U.S. among the most threatening nations — in an unenviable veritable tie for third place with North Korea.

So it seems that despite the relentless propaganda that we in the US are subjected to by people like Mandelbaum, even here people think that US is a greater threat to world peace than Russia and China. It is only among the elites in the political establishment, intellectuals, and media classes that the illusion is perpetuated that the US is primarily a force for peace.

But even in the media, the truth occasionally breaks through. Jake Tapper of CNN confronts neoconservative warmonger John Bolton, now national security advisor to Donald Trump, about the hypocrisy of condemning Venezuelan leader Nicholas Maduro while cozying up to some of the worst dictators in the world. Bolton had, of course, no argument against this so he simply flatly denied that it was hypocritical.

.@AmbJohnBolton on Venezuela: “I’d like to see as broad a coalition as we can put together to replace Maduro”@jaketapper: Do you not see US support for other dictators around the world undermines the credibility of your argument?

Bolton: “No, I don’t think it does." #CNNSOTU pic.twitter.com/KxzYa7SNOH

As another hopeful sign, a number of members of congress have signed on to a pledge to end the ‘forever wars’.

The pledge was written and organized by a group called Common Defense, made up of veterans and military families, which advocates for scaling back U.S. military commitments overseas. Common Defense boasts of more than 20,000 veteran members in all 50 states, and it threw its endorsement behind almost 30 candidates in the last midterm election cycle.

The group’s involvement in electoral politics and Capitol Hill lobbying makes it an oddity in anti-war circles, as peace groups have historically concentrated on mobilizing opposition to war through street protests and marches.
…

All of the signatories so far are members of the Democratic caucus, and most of them are associated with the left wing of the party: Sens. Bernie Sanders and Elizabeth Warren; [Rep. Ilhan] Omar and other freshmen Reps. Alexandria Ocasio-Cortez, Ro Khanna, and Rashida Tlaib; and Congressional Progressive Caucus co-chair Mark Pocan. Common Defense is also courting more moderate lawmakers, particularly those in swing districts and Democrats. So far, the group has also gotten the support of Montana Sen. Jon Tester, who was first elected in the heavily Republican state in 2006 after bucking advice from Washington consultants and running a populist campaign that condemned the Iraq War.

As long as the US is militarily engaged in so many conflicts around the world, the assertions by people like Mandelbaum that it is the main source of peace in the world will ring extremely hollow. 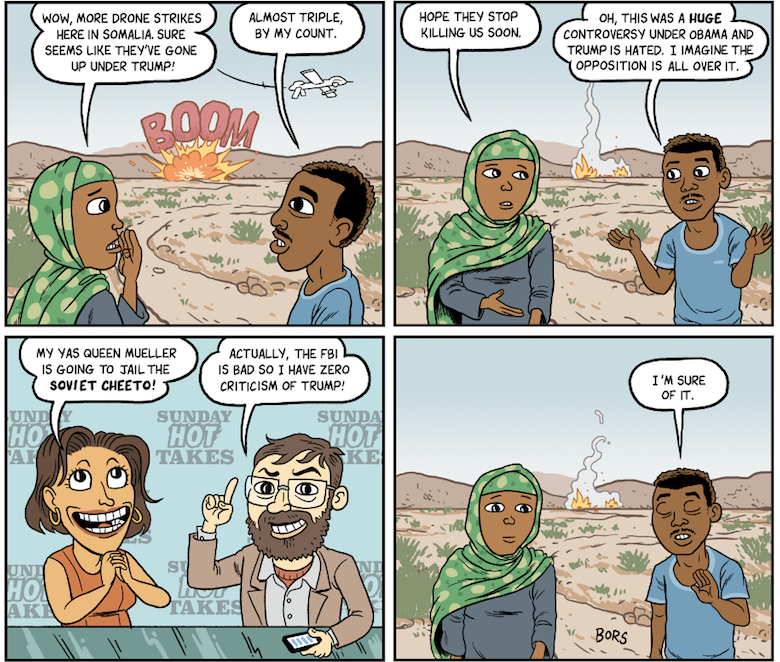