The idea of immortality has had great appeal since time immemorial but was thought of in terms of creating some elixir with the property of bestowing it. But more recently some people have started to think that technology may be able to actually achieve it. This article looks at the ethical implications of two of the proposed methods: rejuvenation and mind uploading.
END_OF_DOCUMENT_TOKEN_TO_BE_REPLACED

A new report issued by the administration of Donald Trump has come out that issues a stark warning of the major costs that the US will incur if climate change is allowed to continue unchecked. The report is pretty stark. You can read the full report of the Fourth National Climate Assessment here and below is a key excerpt from its summary findings.

Communities, governments, and businesses are working to reduce risks from and costs associated with climate change by taking action to lower greenhouse gas emissions and implement adaptation strategies. While mitigation and adaptation efforts have expanded substantially in the last four years, they do not yet approach the scale considered necessary to avoid substantial damages to the economy, environment, and human health over the coming decades.
…

In the absence of significant global mitigation action and regional adaptation efforts, rising temperatures, sea level rise, and changes in extreme events are expected to increasingly disrupt and damage critical infrastructure and property, labor productivity, and the vitality of our communities. Regional economies and industries that depend on natural resources and favorable climate conditions, such as agriculture, tourism, and fisheries, are vulnerable to the growing impacts of climate change. Rising temperatures are projected to reduce the efficiency of power generation while increasing energy demands, resulting in higher electricity costs. The impacts of climate change beyond our borders are expected to increasingly affect our trade and economy, including import and export prices and U.S. businesses with overseas operations and supply chains. Some aspects of our economy may see slight near-term improvements in a modestly warmer world. However, the continued warming that is projected to occur without substantial and sustained reductions in global greenhouse gas emissions is expected to cause substantial net damage to the U.S. economy throughout this century, especially in the absence of increased adaptation efforts. With continued growth in emissions at historic rates, annual losses in some economic sectors are projected to reach hundreds of billions of dollars by the end of the century—more than the current gross domestic product (GDP) of many U.S. states.

END_OF_DOCUMENT_TOKEN_TO_BE_REPLACED

I found this Speed Bump cartoon by Dave Coverly funny but it also highlights something I’ve noticed and that is that the name ‘Bob’ is used very often in comics to label someone who is the butt of the joke. For some reason, there just seems to be something funny about the name. 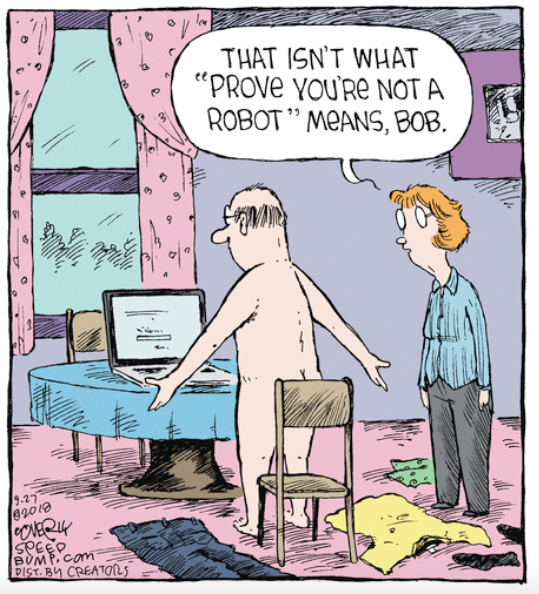 My former institution Case Western Reserve University has not been spared the rise of neo-Nazi propaganda that has been seen nationwide. Within the last few weeks, there have been incidents of swastikas drawn of bathroom walls, one of which houses the office of multicultural affairs and then today the Plain Dealer reports that flyers advertising a neo-Nazi website were found around the campus.
END_OF_DOCUMENT_TOKEN_TO_BE_REPLACED

I hate not knowing where I am and where I am going. While I am not averse to using GPS navigation to find my way around, I admit to not liking being entirely dependent on it. Just following step-by-step instructions from a disembodied voice leave me feeling uneasy because I like to know the big picture. Hence I also take with me old-fashioned road maps and before any trip, look up the general route that I will be taking and commit it to memory.
END_OF_DOCUMENT_TOKEN_TO_BE_REPLACED

Thanks to a sustained effort, the idea of Medicare for All as a way to introduce universal health care coverage has become part of the mainstream conversation. It is no longer seen as the fringe issue it was portrayed as when Bernie Sanders spoke in favor of it just a few years ago during his campaign for the presidency. It played a big role in the congressional elections and Lee Fang and Nick Surgey have obtained a document that outlines how the health industry is gearing up to launch a fight against it.
END_OF_DOCUMENT_TOKEN_TO_BE_REPLACED

Donald Trump’s attack on a federal judge who ruled against him as being an ‘Obama judge’ and thus acting in a biased way resulted in an unusual rebuke from US Supreme Court chief justice John Roberts who decried adding labels to federal judges once they are on the bench, declaring that they should be presumed to be above partisan interests. To no one’s surprise, Trump did not take Robert’s comments lying down and has issued a new series of tweets against the judiciary.
END_OF_DOCUMENT_TOKEN_TO_BE_REPLACED

An Indian village council has created a stir by banning women from wearing ‘nighties’ in public, with the threat of a fine for the women who do and a reward for informants who snitch on them.

Village elder Balle Vishnu Murthy told a visiting colleague from BBC Telugu that the ban was to stop women from exposing their bodies. “It is okay to wear nighties at home but wearing them outdoors could attract attention and cause trouble for the wearer,” he said.

Westerners might be forgiven for thinking of the ‘nightie’ as some kind of flimsy revealing item of nightwear that one sees in stores like Victoria’s Secret. Far from it. It is a one-piece tunic along the lines of a long smock that is slipped over the head and covers the body from the neck to the ankles. It is far more functional than the traditional sari for doing chores and getting around. It did originate as nightwear but expanded its role as its comfort and utility became more widely recognized, pretty much like how sweatpants and yoga pants are now commonly seen in public in the US.
END_OF_DOCUMENT_TOKEN_TO_BE_REPLACED

To no one’s surprise, Donald Trump has sided with Mohammed bin Salman in the murder of journalist Jamal Khashoggi. All that Trump required was a denial by bin Salman and his father the king to feel that the there was sufficient uncertainty to prevent his taking any meaningful steps. Of course, in these days, there is no amount of evidence that can be produced that he could not dismiss by saying that it was fake news, so this was a foregone conclusion.
END_OF_DOCUMENT_TOKEN_TO_BE_REPLACED

Remember the story I wrote about back in August of the Los Angeles man who would use dating apps to arrange dinner dates with women at nice restaurants and after eating an expensive meal would leave the table on some excuse and vanish, leaving the women with huge bills? He had defrauded at least ten women over a period of two years.

Well a court has sentenced him to 120 days in jail, three years of probation, and banned him from using dating apps and websites.

At least for the next three months, he won’t have to pay for his meals.