The BBC has produced a very absorbing 22-minute documentary titled Fake Me: Living For Likes (below) about the life of people who live for likes on Instagram and other social media platforms. They follow an extremely thoughtful young woman named Joey who is a college student and aspiring fashion designer in Nairobi, Kenya. Joey hated social media and did not have any presence on it at all because of what she saw it doing to her friends who had become so addicted to that online world that they would ignore the real people around them.

The BBC persuaded Joey to try becoming a social media personality for a week and hooked her up with an existing social media star named Glamour Pam who gave her tips on what she needed to do. (There was some controversy when the BBC blurred images of Glamour Pam’s cleavage in some shots for fear of offending viewers in some of the countries where the show would be seen.)

During the week Joey reflects on her changing moods and the effect that pressure to get ‘likes’ had on her own self-image and how she felt herself changing. These reflections are interspersed with the views of experts on social media and the effects it has on people. The main problem is that it feeds the need for people to constantly get validation of their worth from people they don’t even know but who know them only from their online presence. This puts pressure on them to conform to others’ expectations of them, and this can result in them losing their sense of self and not knowing who they are. The Washington Post has a long article about Bailey Richardson, one of Instagram’s original employees, who quit the company and deleted her account after becoming disillusioned when she saw what it had become.

The world of so-called social media influencers is a strange one where they leverage the number of followers to promote various products, events, and people. Now there is another controversy over so-called ‘blackfishing’ where white influencers try to pass themselves off as black 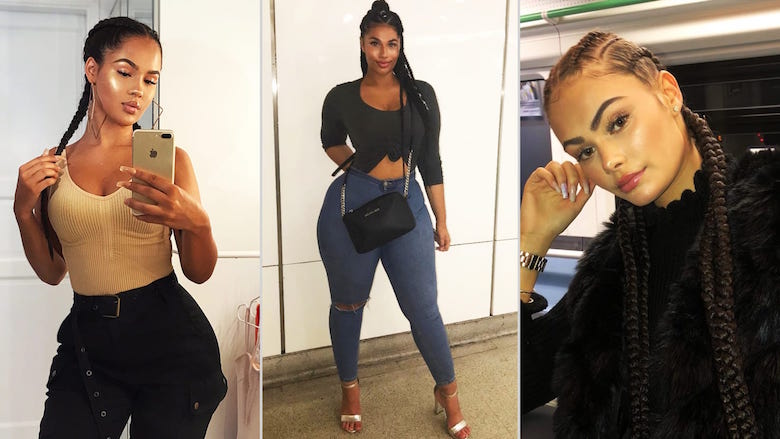 At first glance, Emma Hallberg’s Instagram page looks like that of any other young, pretty social-media influencer of a certain age. Most of her photos are selfies, and nearly all of them see Hallberg pouting provocatively at the camera. In one photo, Hallberg poses in a neon green bodycon dress-her curvy figure, tan skin, and long, straight dark hair clearly the focus. “Neon colors always makes [sic] you look summer tanned,” the caption reads. In another photo, Hallberg crouches in front of a mirror, decked out in in a tube top, jeans, and thigh-high boots from Cardi B-endorsed clothing line Fashion Nova. Her caption, fittingly, seems to have been ripped straight from the Bronx rapper’s own Instagram page: “I could buy designer but this @fashionnova fit !”

There’s just one catch: Hallberg, despite Instagram evidence to the contrary, is white.
…

Hallberg is merely one of many white or white-passing women on Instagram who’ve gained attention in recent weeks for their controversial styling that mimics the skin tone, hair, and aesthetic of many black women, and their unwillingness to be transparent about their non-black heritage-a practice dubbed “blackfishing” on social media. Most of these white women have significant Instagram followings, and most of them feel immune to criticisms of cultural appropriation-at least until a controversial Twitter thread called them out last week.
…

Brzotowska and Hallberg are hardly the only women on Instagram engaging in “blackfishing,” or at the very least, behavior veering into cultural-appropriation territory. A slew of equally white women with similarly large followings were also named in the viral Twitter thread.
…

Most of these white women seem to feel no remorse over posing as black, or exploiting elements of black culture for aesthetics and Instagram clout.

I wrote recently about Clarence King who in the late 19th century lived a double life as a prominent white geologist as well as a black Pullman porter. But there is a world of difference between pretending to be black because he felt that it was the only way to marry the woman he loved, and pretending to be black in order to improve your ranking in the social media influencer world.

The guilt and shame of killing someone » « Impressive trick