Some of you may have read H. G. Wells’s novel The Invisible Man. There have been several films based on it that I have not seen but as a young boy, I was fascinated by a TV show that was based on the same idea but is set in modern times and is otherwise nothing like the book. In this show, as in the book, a scientific experiment gone wrong makes a man completely invisible, so he goes around wearing clothes, gloves, sunglasses, hat and with his face fully bandaged in order to keep his invisibility secret and make his presence visible and not freak people out.

In the TV series he becomes a secret agent for the British government and has all kinds adventures each week that required him (and this was always the highlight of each episode) to remove the bandages and clothes for some reason and move about invisibly, startling passers by who see any stuff he is carrying floating in the air and seeing a car that he drives (often inexplicably a convertible with the top down) going along the roads with no one at the wheel. With the advent of driverless cars, people now would be less perturbed.

But there are many problems with the concept that Wells necessarily had to skirt over. One is that if the man is invisible because his refractive index for light is exactly one so that light passes straight through, that would also mean that the lenses of his eyes could not cause incoming light to focus on his retina and he would be effectively blind.

This cartoon points out another problem that I don’t recall the TV series addressing and that is what happens when he eats and drinks? At what point does it become invisible too? 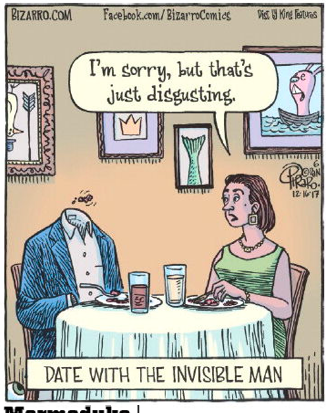