A report says that in 2018, Donald Trump will reduce the demanding schedule that he pursued in 2017 which involved playing a lot of golf at the various course and resorts that he owns. (There is a website that tracks the amount of golf that he plays.) This year he has told his aides that he wants more ‘executive time’, i.e., time alone, and that his first scheduled daily meeting will be his intelligence briefing at 11:00am. And it does not get much busier the rest of the day either.

The practice of blocking off some time during the day where you were not disturbed is actually a good thing and something I used to recommend to faculty. It is easy to have the day become filled with routine matters that you easily lose sight of the big picture and the important stuff, which in the case of university faculty is research and writing. I would suggest to faculty that they block off on their daily calendars a period of time for scholarly writing and that time should be treated as inviolable as the time set aside for teaching classes or attending meetings.

But I doubt that Trump sees this ‘executive time’ as being for quiet reflection about important matters. What is it likely to consist of? Given what we know about his habits and that he does not read, it will be him lying in bed in his pajamas, watching TV, calling his friends, eating cheeseburgers, drinking Diet Coke, and sending off tweets about anything that strikes him, especially by things that he sees on the inane morning showFox and Friends which provides a daily diet of stories that both flatter him and feed his obsessions. 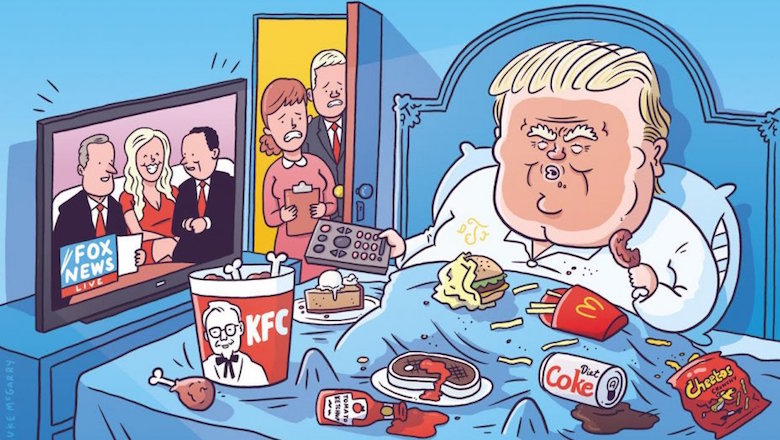 Luke Garry for The Hollywood Reporter

It is easy to see how Michael Wolff got his access to the White House for a full year to write his book, even though he had written an article about him for the The Hollywood Reporter in June 2016 that was unflattering. But the magazine had put a photo of Trump on the cover that they liked and that seemed to as far as they got in reading it. Wolff explains in an interview that Trump and the other people in the administration would occasionally ask him what he was doing there and when he told them he was writing a book, they would immediately lose interest. Clearly a book to them was something of no value.

I interviewed Donald Trump for The Hollywood Reporter in June 2016, and he seemed to have liked — or not disliked — the piece I wrote. “Great cover!” his press assistant, Hope Hicks, emailed me after it came out (it was a picture of a belligerent Trump in mirrored sunglasses). After the election, I proposed to him that I come to the White House and report an inside story for later publication — journalistically, as a fly on the wall — which he seemed to misconstrue as a request for a job. No, I said. I’d like to just watch and write a book. “A book?” he responded, losing interest. “I hear a lot of people want to write books,” he added, clearly not understanding why anybody would. “Do you know Ed Klein?”— author of several virulently anti-Hillary books. “Great guy. I think he should write a book about me.” But sure, Trump seemed to say, knock yourself out.

The low bar that has been set for Trump can be seen by this attempt by David Brooks to suggest that Trump is not as bad as he is being portrayed.

“Let me start with three inconvenient observations, based on dozens of conversations around Washington over the past year: First, people who go into the White House to have a meeting with President Trump usually leave pleasantly surprised. They find that Trump is not the raving madman they expected from his tweetstorms or the media coverage. They generally say that he is affable, if repetitive. He runs a normal, good meeting and seems well-informed enough to get by. Second, people who work in the Trump administration have wildly divergent views about their boss. Some think he is a deranged child, as Michael Wolff reported. But some think he is merely a distraction they can work around. Some think he is strange, but not impossible.”

That’s damning with faint praise if I ever saw it.

I wonder how widely the term ‘executive time’ will become adopted in the world of work for people who simply want to be left alone during the day to take a nap or play video games.

It is hard to imagine how people can fall for this, but some do » « The problem with open secrets