The Republican party seems all over the place over what to do about their Alabama senate candidate Roy Moore. Leaders in the party have said that if the allegations are true, Moore should step aside. This is significant in that they are allowing for the possibility that the allegations may be true. I would have expected them to close ranks and decry the story as fake news and a fiendish Democratic plot aided by the fake news liberal media. Part of the reason may be that the avalanche of sex abuse revelations by prominent people has suddenly shifted the center of gravity of the discussions, so that women’s charges that they were abused are no longer summarily dismissed.

However Moore is not going anywhere. He has strong support from Steve Bannon’s Breitbart News and there are people who are offering all manner of excuses for their continued support, with some saying that they would continue to support him even if the charges are true because, after all, that is what Jesus would do. My favorite was from Alabama State Auditor Jim Zeigler.

“Take the Bible. Zachariah and Elizabeth for instance. Zachariah was extremely old to marry Elizabeth and they became the parents of John the Baptist,” Ziegler said choosing his words carefully before invoking Christ. “Also take Joseph and Mary. Mary was a teenager and Joseph was an adult carpenter. They became parents of Jesus.”

So, according to Ziegler, pedophilia is justified because it produced Jesus. But isn’t he overlooking something? According to Christians, Jesus was conceived without Joseph and Mary having sex. After all, she is not called the Virgin Mary for nothing. Of course, since Moore is not accused of actually having intercourse with the 14-year old girl but just engaging in other sex acts, that may let Ziegler off on a technicality though I am not sure that Christians would like the idea of Mary engaging in sex acts just because they stopped short of intercourse.

And playing the Jesus card did not stop there, with Moore’s brother saying that Moore is being ‘persecuted’ just like Jesus was.

It is clear that the GOP is in a no-win situation with Moore. He is going to stay in the race and given that this is Alabama and how the evangelical Christian community does not really give a damn about morality despite all the publicly professed piety, he may well win the election with or without the support of the national party. If he loses, that would be bad for them because they lose a sure senate seat and their majority gets reduced to 51-49. If he wins, then given that he will not take kindly to arcane senate rules, he is likely to use the senate as a pulpit to promote his wacky religious and anti-gay extremist views. So GOP leaders will constantly be asked to say whether they support his statements or not, and they have enough trouble already responding to Trump’s wild statements.

It serves them right. The GOP’s behavior over decades has created the monsters now taking over their party. 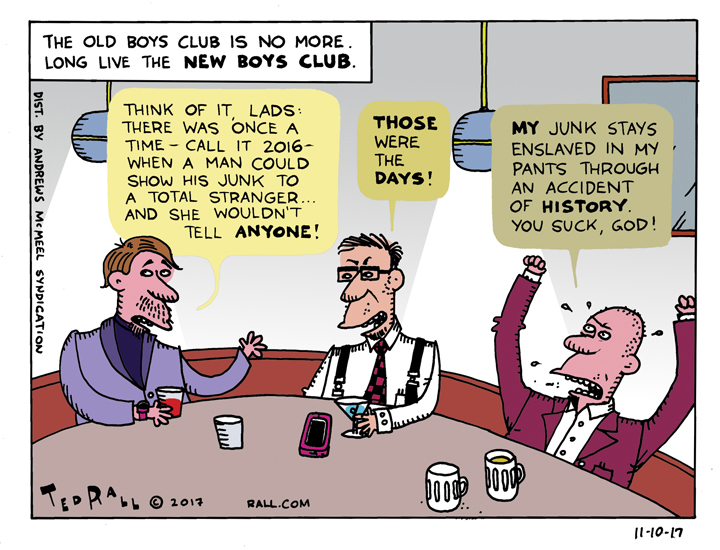 The explostion of sexual assault and harassment allegations against politicians, entertainment figures and other authority figures signals a cultural shift that this behavior will no longer be tolerated. Which means it’s a new era for a certain kind of man.

You can never be too specific » « Mommas, don’t let your babies grow up to be libertarians