The First Circuit Court of Appeals has, in a 2-1 decision, overturned a federal district court opinion that a big cross on public land in Maryland did not violate the Establishment Clause. The cross is 40 ft high and was erected in 1925 in memory of soldiers who died in World War I. The case was brought by the American Humanist Association, the Freedom From Religion Foundation, and the Center for Inquiry. You can read the opinion here.

In this case we are called upon to decide whether the Establishment Clause is violated when a local government displays and maintains on public property a 40-foot tall Latin cross, established in memory of soldiers who died in World War I. The district court determined that such government action does not run afoul of the Establishment Clause because the cross has a secular purpose, it neither advances nor inhibits religion, and it does not have the primary effect of endorsing religion.

We disagree. The monument here has the primary effect of endorsing religion and excessively entangles the government in religion. The Latin cross is the core symbol of Christianity. And here, it is 40 feet tall; prominently displayed in the center of one of the busiest intersections in Prince George’s County, Maryland; and maintained with thousands of dollars in government funds. Therefore, we hold that the purported war memorial breaches the “wall of separation between Church and State.” Everson v. Bd. of Educ., 330 U.S. 1, 16 (1947) (internal quotation marks omitted). Accordingly, we reverse and remand.
…

Upon completion, the monument at issue stood four stories tall in the shape of a Latin cross located in the median of a three-way highway intersection in Bladensburg, Maryland (the “Cross”). Over the years, memorial services continued to occur on a regular basis at the Cross, and those services often included prayer at invocations and benedictions, and speaker-led prayers. Sunday worship services have at times been held at the Cross. Nothing in the record indicates that any of these services represented any faith other than Christianity. 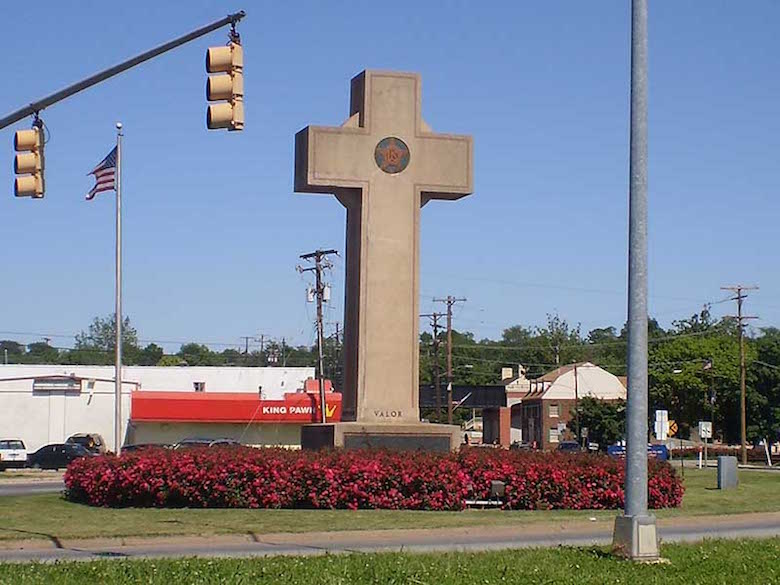 Actually, not only does this cross violate the Establishment Clause, it also violates good taste because (to me at least) it looks pretty ugly. Having to drive by it regularly would be pretty annoying simply on aesthetic grounds.

Political bedtime stories to get through difficult times » « Is there anyone in the White House who is not a pathological liar?