Lena Groeger of ProPublica writes about cases of bad design that can lead to death or other dangerous situations. She starts with the freak accident that killed actor Anton Yelchin.

Earlier this summer, 27-year-old actor Anton Yelchin was crushed to death when his Jeep Grand Cherokee rolled downhill, pinning him against the security gate in front of his Los Angeles home. No one will ever know exactly what happened in the moments before the accident. But we know that his car is one of more than 1.1 million Jeep and Dodge vehicles that are part of a recall by Fiat Chrysler. The problem? Flawed design.

Specifically, it’s the unintuitive automatic shifter, which can make drivers think they’ve put the car in park when they haven’t. If a driver were to exit the car with the engine not in park, all 5,000 pounds of the vehicle could roll away, crashing into any objects (or people) in its path.

Here’s the issue. Traditional automatic-transmission shifters slide to a certain position and stay there, giving you tangible and visual clues about what gear the car is in. The “monostable shifter” in some Chrysler cars, on the other hand, moves and then returns to the center position, no matter what gear it’s in. Besides some subtle clicks as you switch gears, there is nothing beside the tiny letters on dashboard or on the shifter itself (conveniently located right under your hand) to show you what gear you’re in.

Some of the other flawed designs fall into the “What the hell were they thinking?” category, especially Fabuloso household cleaner bottles that look like fruit juice bottles, so much so that they are sometimes even sold side by side because the shelves stockers were misled. 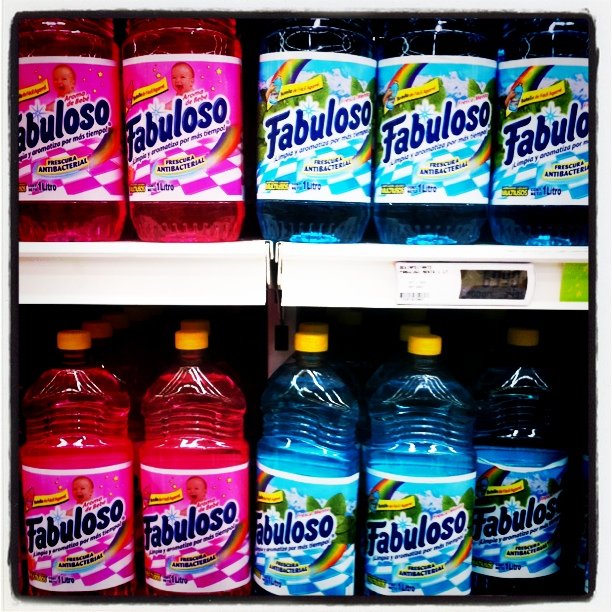 Fabuloso comes in a multitude of flavors like lavender, passion fruit and citrus. Just don’t drink it. (Maqroll via Flickr)

The colorfully packaged multi-purpose cleaner Fabuloso has a record of mistaken identity. In 2006 researchers looked at about four months of data from the Texas Poison Center Network and found 94 cases of people accidentally ingesting the household cleaner.

In case you don’t believe that anyone would actually drink multipurpose cleaner accidentally, just ask the six long-distance mountain bikers in Norway who drank laundry detergent thinking it was an energy drink and ended up in the hospital.

The makers of Fabuloso, Colgate-Palmolive, did not respond to ProPublica in time for publication.

Part of the problem may be the desire of designers to do something distinctive, that stands out from the rest, to attract people’s attention. With rental cars, for instance, sometimes it takes me quite a lot of time to figure out how the controls for the lights, heat/cool, mirrors and seats, work. While most are intuitive, some are not.