In September 2012, Karen L. King, the first woman to hold Harvard University’s 295-year-old Hollis Professorship of Divinity, announced at a meeting in Rome the discovery of a piece of ancient credit card sized parchment that contained scraps of dialogue written in the Egyptian language of Coptic supposedly of a dialogue between Jesus and is disciples where Jesus refers to “my wife”. 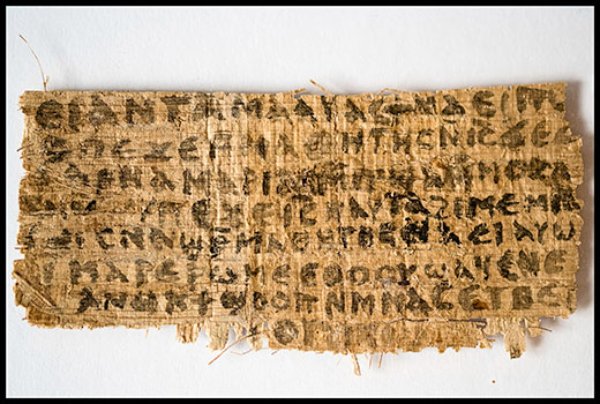 The suggestion that Jesus was married, likely to Mary Magdalene, naturally caused a sensation within the global Christian community and with scholars of ancient texts. The Vatican naturally denounced it because the idea that Jesus was celibate and entrusted his mission only to male disciples forms the basis of its policy of only allowing celibate male priests and treating women as second class. Reporter Ariel Sabar was assigned by Smithsonian magazine to cover the story and published this article about it.

There were suspicions, based on flaws in the wording of the script, that the parchment was a fake even though tests showed the papyrus was ancient and the ink used corresponded to those used in those days. Despite the skepticism of some of her colleagues, King remained convinced that it was genuine.

As Sabar watched the subsequent debate unfold about whether or not the parchment was genuine, he became interested in a question that was not being closely looked at, and that was the provenance of the parchment. In the world or art and antiquity, the provenance of a piece of work is its history of ownership and can shed light on legitimacy.

So he started investigating the ownership chain and has written about what he found in a long but fascinating piece that reads like a detective story. He uncovered the trail of an elusive and wily operator named Walter Fritz who cunningly was able to persuade King to convince herself that she had been given a historic document.

King, after reading Sabar’s article, says that the evidence now points to the parchment being a fake. One feels sorry for her but the story is a cautionary one about how even noted scholars can let their guard down and be fooled when dealing with evidence that is congenial to their point of view.