The armed group led by the sons of Cliven Bundy that came all the way from Nevada and other distant places and has taken over a remote wildlife refuge in rural Oregon near the small town of Burns in the hopes of starting some kind of uprising against the federal government seem to be running into opposition from the very people whom they claim to be protecting from tyranny, the local population. Those people are fed up.

For days Ammon Bundy and his band of armed militia have laid claim to the federal land by arguing they have the support of the nearby community.

Yet that claim received a formidable rebuke on Wednesday night when, one by one, residents of Oregon’s rural Harney County stood before a microphone at the county fairgrounds to denounce the occupation on their doorstep.

Some 500 working-class men and women who packed into the memorial hall expressed an overwhelming consensus. It’s time, they said, for Bundy and his anti-government rabble-rousers to pack up and go home.

“This county is a united family and we don’t need people to come here from someplace else and tell us how to live our lives,” [Harney County sheriff David] Ward said to a standing ovation.

But Bundy says that said that they will not leave until the government “restores the constitution”, which as far as I can tell means letting people like him telling the government what it can and cannot do.

Tim Dickinson gives a day by day description of how the would-be revolutionaries seem to be short on people, food, and other supplies and perhaps slowly realizing that they have been placed in an awkward situation from which a dignified withdrawal is becoming less likely. He concludes, “Instead of building the fearsome anti-government insurgency of their fever dreams, the hungry, dirty, exhausted Bundy militants are looking more and more like the Gang That Couldn’t Shoot Straight. Here’s hoping they have the sense to lay down their weapons before their true marksmanship is tested.”

Jeffrey St. Clair writes that he visited Burns about two decades ago and wrote about how Dwight Hammond, whose recent arrest and conviction and imprisonment along with his son for arson triggered the arrival of these militants, also had a long history of lawlessness.

In the early 1990s, Hammond repeatedly transgressed federal environmental laws, trespassed on federal lands and hurled death threats at federal wildlife officials. Little action was taken against Hammond by a timid Clinton administration. Emboldened, Hammond and some of his fellow ranchers continued over the next two decades to flagrantly flout environmental laws and harass federal officials. These activities finally culminated in an act of poaching on Steens Mountain and two arson fires. Hammond and his son were convicted in federal court and sentenced to five years in prison. That conviction sparked the armed takeover of federal buildings now unfolding in Burns.

As of now, power to the refuge has not been cut off and the roads not blockaded as was threatened, which means that the people occupying the refuge are free to go to the grocery store in the nearest town 30 miles away to stock up on food, so the whole thing is looking more like a boy scout camping experience, just with guns. I am not sure why the authorities have not taken this minimal action against the group. Maybe they feel that even those measures are not necessary in order to wear them down.

Stephen Colbert is bemused by the standoff.

These constitution-loving patriots seem to have got used to the fact that they are a privileged class because they are white and heavily armed and talk the language of opposing government tyranny, the same language used by the Republican party, tea partiers, and the gun lobby and other conservative voices in the US. They seem to feel that this gives them immunity from the kind of response that anyone else would get if they acted in a similar fashion and that they can act with impunity. Who knows what demands they will make next? 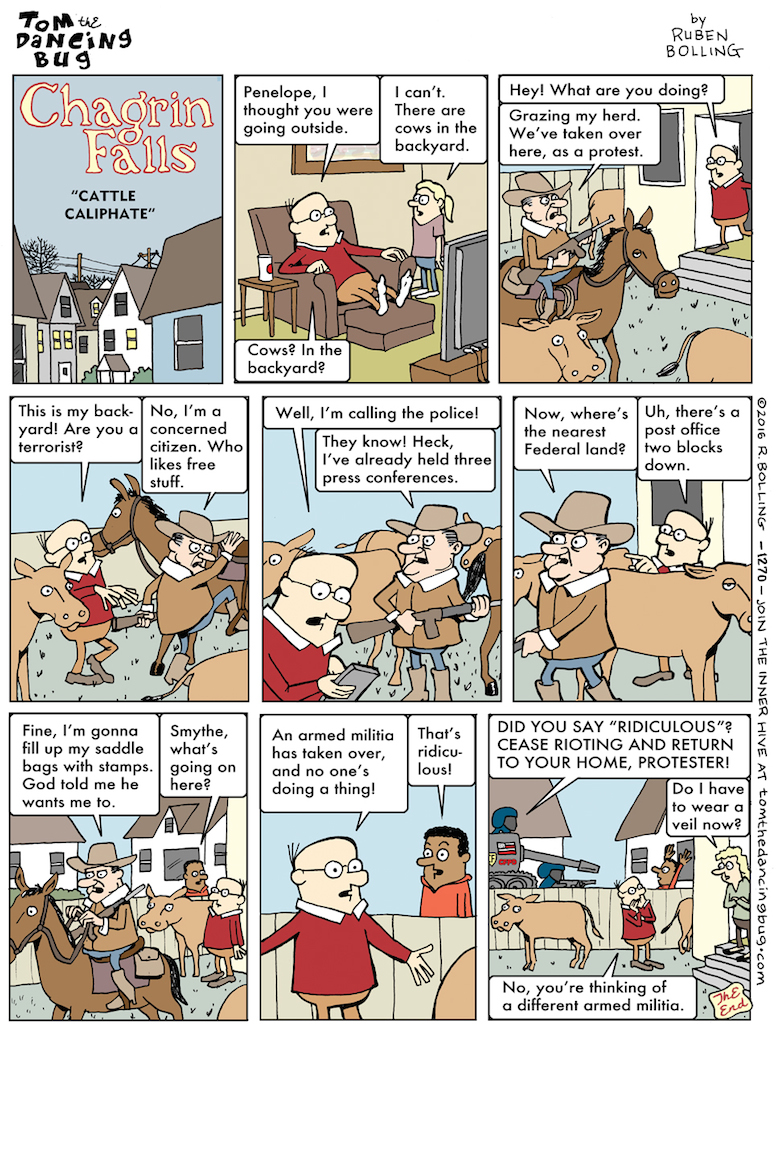