Ben Carson claims that his life is in “great danger” from the “secular progressive movement” because they see him as an “existential threat” to them. He is reported to have requested Secret Service protection and it is supposedly under consideration.

To me this is one more sign of his delusional thinking. Any public figure in America is always at some heightened level of danger because it is so easy for some obsessed and delusional person to get guns, and it is not uncommon for presidential candidates at this stage of the process to ask for and get some protection. But the idea that the danger comes from the secular progressive movement because it thinks he poses such an existential threat to them that requires him to be killed is absurd on its face. As a proud member of that group, I can assure him that we are too busy laughing at him to think about such treasons, stratagems, and spoils.

But other reports say that it is “home-grown terrorists linked to the Islamic State jihadist group” who are threatening both him and Donald Trump.

I think his biggest threat is that he will be beaten by mobs of angry senior citizens when they find out that he wants to completely eliminate their beloved Medicare, not to mention Medicaid.

Republicans have fended off accusations for years that they’d gut Medicare for seniors and end the program “as we know it.”

Not Ben Carson. The former neurosurgeon acknowledges he would abolish the program altogether.
…

“This isn’t a borderline issue. The politics of this are horrific,” said Doug Holtz-Eakin, head of the American Action Forum and health care adviser to Sen. John McCain’s 2008 presidential campaign.

Carson’s stance on the third-rail issue of Medicare is especially risky given his strength among elderly voters. In Iowa, Carson draws a quarter of the senior vote — more than double any other candidate except Donald Trump, with whom he’s statistically tied among seniors. Carson’s support is even higher among voters between the ages of 55 and 64, who are on the verge of Medicare eligibility. He draws 34 percent of that age group, double Trump’s level of support, according to the Quinnipiac poll.

But I don’t know why he is requesting Secret Service protection at all since he has claimed that he knows exactly what to do in such situations. Surely if he is confronted by some gun-wielding fiend at some point, he could repeat what worked so well for him at Popeyes and tell the gunman that he should take aim at all the other Republican candidates. 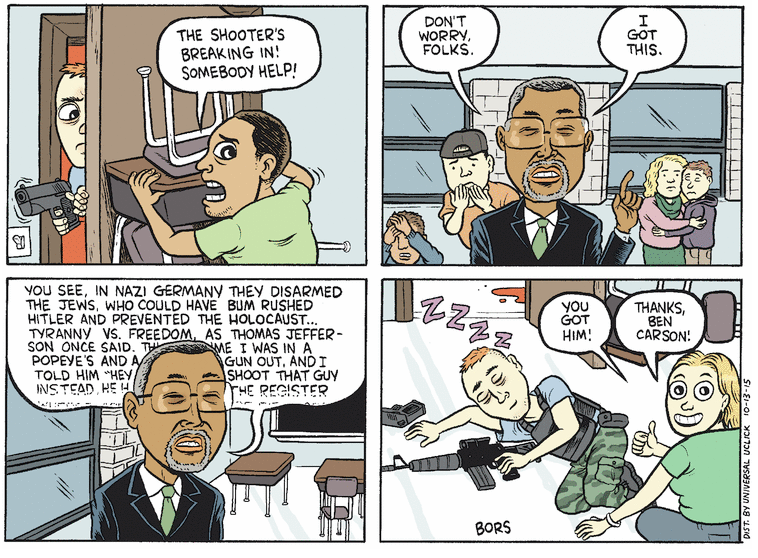 Wolf Blitzer is a ‘kiss up, kick down’ guy » « Propaganda demands that a terrorist depends on who s/he is, not what s/he does