Every time I think that the state of US politics in general, and the Republican party in particular, has reached new depths of dysfunctionality and cannot sink any lower, I get proved wrong. The bizarre struggle to find a new Speaker for the House of Representatives truly marks a major new low. The Speaker’s post was until just recently something that ambitious young congresspeople aspired to as the pinnacle of their careers. It enabled the holder to wield considerable political power, someone who, along with the senate majority leader and the president, pretty much determined the agenda of the country. The Speaker was the second in line for the presidency, after the vice-president, which gives some idea of the importance attached to the position by the drafters of the US Constitution. (UPDATE: This is wrong. As Chiroptera points out in the comments, the complete line of succession is not in the Constitution but is specified by law. Ahcuah points out that some legal scholars say that the Speaker does not qualify to be in the list at all. Thanks to both!)

So what are we to make of the current situation where it is seen as the kiss of death for a political career and people are being begged to take the job?

The current situation is that Republicans have 247 members, the Democrats 188, and the election is by the full chamber of 435 which means that as long as you can garner 218 votes, you can win. A lot of attention has been focused on the chaos within the Republican party because they are the majority party and thus the ones who can elect the Speaker on their own without opposition support. The scenario was supposed to play out as follows: John Boehner uses his last month in office to pass (with Democratic support and over the objections of the nutcases in the party) a long-term budget and raise the debt ceiling, thus clearing the decks for his designated successor Kevin McCarthy to have at least some breathing space before the next crisis lurches into view.

The sudden withdrawal from the race of McCarthy on Thursday amid all manner of dark rumors has resulted in complete meltdown. The problem is that Republican caucus cannot seem to get 218 in support of anyone within its own ranks and a Speaker who has to depend on Democratic votes to get elected will be seen as a traitor to the party, because the Speaker is seen as a party leader and thus a partisan. This is quite different from the British parliament where the Speaker, although also elected by the full chamber and thus likely to be a member of the majority party, is supposed to be strictly neutral. Thus a Speaker there who gets a lot of support from both sides of the aisle is desirable.

It looks like no one can command a majority within the Republican caucus. Even the one-time golden boy Paul Ryan who was thought to be a possible unifier and is being urged to run by many and is as right wing as they come, is being denigrated by some in the nutcase wing. This wing consists of the Freedom Caucus (36 members) and the Liberty Caucus (36 members), although 21 members belong to both groups making 51 in all. They have suspicions that Ryan is a party establishment stooge and ‘too soft’ (i.e., unwilling to shut down the government) in pursuit of the issues they care about. It is clear that these nutcase members positively hate Boehner (and also Senate majority leader Mitch McConnell) who they think feel more at home talking with president Obama than with them. Which may well be true. Anyone who is seen as being too close to Boehner or McConnell, and thus anyone in the party leadership and that includes Ryan, thus becomes immediately suspect.

To fully appreciate this situation, we have to remember that Ryan is an extreme oligarchy-worshipping conservative who wants to cut all manner of services that benefit the poor and middle class and was memorably and accurately described by Charles P. Pierce as a ‘zombie-eyed granny starver’. He is also an Ayn Rand devotee. It is this person who is considered not extreme enough! 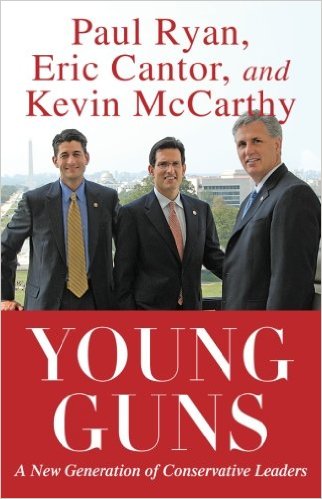 It is interesting that the three who were once seen as the future leaders of the party are reduced to just one, and even he is damaged goods. Taking their identity from a cowboy film, the pitiless three of Ryan, Eric Cantor, and McCarthy branded themselves as The Young Guns and even published a self-aggrandizing book in 2010 claiming that they were a new breed of hard-nosed conservatives who would ride into Washington and clean up the town, throwing out the old guard and enacting the Tea Party agenda.

So what happened to them? In 2014 Eric Cantor lost his primary race to a Tea Partier. McCarthy has just been sandbagged in his attempt to become Speaker and is in decline and will likely not last long in Congress. This leaves just Ryan and even he is lying low, resisting the entreaties of the party leadership to take the Speaker’s post as the only possible unifier. Why is he resisting? Because he likely realizes that the wolves that he himself unleashed in the form the Tea Party, Freedom Caucus, and Liberty Caucus will wait only for a short while before they tear him limb from limb for being just another establishment compromiser, not willing to shut down the government over Obamacare or Planned Parenthood or the budget or Benghazi or the debt ceiling or Iran or whatever the hell is the current burr in their saddle. Who knows how long he will last?

Like with all such dramas, this can also serve as a teaching moment. For example, I did not know until this week that the US Constitution does not require you to be an elected member of the House of Representatives to be elected Speaker of that body, though every Speaker in the past has been a member. So now in desperation all manner of wild suggestions are being made for outsiders to come in as saviors and become Speaker, including Newt Gingrich and Mitt Romney and (Baphomet help us!) Joe Lieberman. Some have suggested that John Boehner withdraw his resignation since that would mean no election is necessary.

California Democratic congressman Mark Takano has fun at Republican expense by posting a Craigslist ad for the position, describing the requirements that he thinks are necessary, such as “Proven ability to work with irrational people who pursue narrow priorities at the expense of millions of others”. I think that they should seize the opportunity of selecting an outsider to find someone who has been a hostage negotiator or marriage counselor or other kind of conflict mediator because that seems to be the kinds of skills that the current job requires.

We live in a time when there seems to be a breakdown in the simple mechanics of governing.