We are witnessing yet another example of how Republican infighting is creating a chaotic legislative situation. The party has long since morphed into something in which the labels moderate and conservative no longer fit the factions within it. Instead we now have two groups better described as extremists and nutcases, the former being those who hold the extreme positions on economic issues that their oligarchic bosses demand and the extreme positions on social issues that their Tea Party base expects. This group controls the leadership of the party.

The problem for the Republicans is that they hold majorities in the US Senate (54-46) and in the House of Representatives (246-188) and so the party base expects it to be able to pass their agenda and feel frustrated that they seem to be losing on so many things such as the debt ceiling, Obamacare, and same-sex marriage. The nutcases are exploiting this sense of frustration to try and embarrass the extremists in the leadership.

We see the dynamic between the two groups played out most clearly in the vote on the Iran nuclear deal. The extremist party leadership realized long ago that a deal negotiated by the US president and agreed to by the P5+1 coalition of the US, Germany, Russia, China, UK, and France could not, and should not, be derailed because that would leave the US completely isolated on the world stage with only Israel supporting it.

But Israel and the right wing Israel lobby in the US led by AIPAC were demanding that the deal be scuttled and pulling out all the stops to do so, to an extent that was unprecedented in the contemptuous way it treated president Barack Obama. So the Republican leadership, led by the chair of the Senate Foreign Relations committee Bob Corker of Tennessee, decided on a strategy to have the deal passed without them having to vote in favor of it and thus alienating its Israel-supporting fundamentalist Christian base.

The first step was in deciding that the deal would not be considered a treaty, which would have required 2/3 majorities in both houses to pass. This requires 67 votes in the Senate and 290 in the House and thus would require at least some Republicans to vote in favor of it and this was unpalatable.

The other possibility was to say that Congress would be required to vote approval of the deal. This would require a simple majority of both houses and again would require Republicans to vote in favor and so was ditched.

So the plan agreed to with the Democrats and the White House was that there would be a sixty-day window in which Congress could vote disapproval of the deal. That deadline is on September 17. Failing to do so by then would mean that the deal gets approved. Since it was clear that any vote of disapproval would be vetoed by the president, this meant that now Congress would need a 2/3 majority to override the veto. In other words, to have the deal approved only required 34 votes in the Senate and 146 votes in the House to sustain the veto. Since most Democrats would likely support the deal despite the pressure of the Israel lobby, every Republican could now vote against the deal and still have it go through.

Under the Sen. Bob Corker (R-TN)- Sen. Ben Cardin (D-MD) compromise hammered out by lawmakers and signed by the President in May, lawmakers had 60 days to consider the deal before voting to approve or disapprove the negotiation. (Or lawmakers alternatively could do nothing and Obama could still implement the deal). It was assumed that the clock began ticking in July soon after the deal had been announced, giving lawmakers a September 17 deadline to weigh in on it.

This strategy of finding a way to lose on an issue even while you have the majority and vote unanimously against it is not new. It has been used before in getting the debt ceiling raised and is one of the many forms of legislative shenanigans that have become necessary because of the conflict between the basic duties of governing a country and pandering to your lobbies and base.

As of the last two days, 42 Democratic senators had announced that they would vote in favor of the deal, with only four of them joining the Republicans in opposing the deal. So approval of the deal is now guaranteed. This also meant that if 41 of them voted to filibuster the disapproval vote, then the president would not even need to veto the bill.

Opponents had thought that once Congress came back from its August recess on September 8, pressure could be ratcheted up on wavering senators to vote against the deal. They had even scheduled Dick Cheney to emerge from his crypt to deliver a speech against the deal yesterday at the American Enterprise Institute. Why Republicans think that Dick Cheney is influential is a mystery. In fact, the best way to get support for the deal is to have Cheney speak out against it and the White House went out of their way to mock Cheney with this ad.

And in fact, what happened during Cheney’s speech epitomized the sense of impotent anger of the deal’s opponents when a young Code Pink protestor holding a sign that said “Cheney: Wrong on Iraq, Wrong on Iran” disrupted it. A man identified as Patrick Clawson, a top executive at WINEP (Washington Institute for Near East Policy) widely regarded as AIPAC’s think tank, tried to tear the sign away from her and was unable to do so despite being much bigger than her. He had to ignominiously sit down as she easily held on to her sign with one hand. It is pretty funny to watch.

But all this posturing comes too late. This has to be seen as also a major defeat for the Israeli government of Benjamin Netanyahu and AIPAC, the chief right wing arm of the Israel lobby, that had poured resources into defeating the deal. AIPAC has had its aura of strength seriously undermined. Meanwhile this fight has strengthened the hand of Jewish organizations in the US who have been fighting the idea that AIPAC speaks for all American Jews.

This has made the nutcases furious. The rally they had planned for yesterday in front of the Capitol was an exercise in futility although new best friends Ted Cruz and Donald Trump used it to get more attention to themselves.

In their desperation, some House members are now trying to sabotage the deal their own party agreed to using a new tactic to prevent the September 17 deadline kicking in by bringing in new spurious objections. This derailed the planned vote yesterday on the deal in the House. But Senator Corker is not a fan of the new tactic and it seems unlikely to get anywhere in the Senate even if it gets approved in the House and will simply underscore the sense that they are losers. As Greg Sargent said, “On Iran deal, Republicans move swiftly to snatch defeat from jaws of defeat.”

So there we are. The Iran deal is going to be approved. The only remaining issue now is whether the disapproval vote will be filibustered by 41 of the 42 Democratic senators who say they support the deal and thus simply have the vote of disapproval die on the vine or whether it passes and president Obama has to veto it and have the veto sustained. 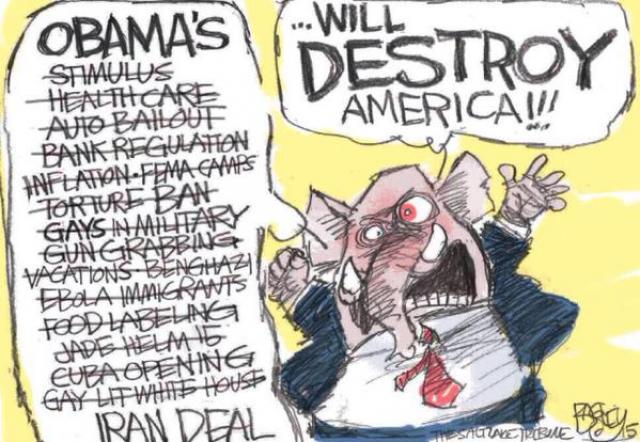 Why Trump is here to stay » « Review: The premiere of The Late Show with Stephen Colbert